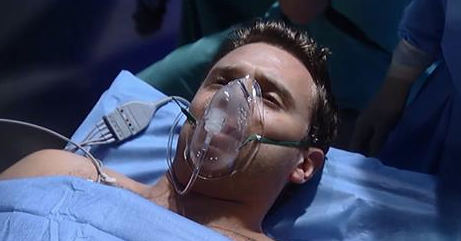 Here is a fresh serving of “General Hospital” spoilers for the ABC soap for Monday, February 23 and the coming week. A love triangle is brewing between Elizabeth Webber (Rebecca Herbst), Jake Doe (Billy Miller) and Ric Lansing (Rick Hearst). Ric will confront Elizabeth about her feelings for Jake and so we have to ask – shouldn’t someone else be in charge of Jake Doe’s defense by now? Why not Diane Miller (Carolyn Hennesy)? Remember how she got Franco off by showing his tumor in the jar? Diane could do the same with Jake’s microchip in a jar. After all, Ric won’t be doing his level best to keep Jake out of  jail since he’s sure Liz has the hots for him. Liz will confront Ric about half-hearted lawyering on behalf of Jake.

And Vinessa Antoine will be back this week as Jordan Ashford, the undercover agent pretending to be part of the mob. Anna Devane (Finola Hughes) will fill Jordan in on her plan to build a case to take down Kyle Sloane (Grayson McCouch). Anna is looking at Sloane’s possible mob ties and will talk to both Jordan and Duke Lavery (Ian Buchanan) about her investigation. Left in charge of the Corinthos syndicate, Duke will make a bold move to make peace with the Jerome crime family. Nikolas Cassadine (Christopher Tyler) will reach out to Sloane to figure out how to best protect them both from Anna’s investigation.

Sonny Corinthos (Maurice Benard) will show up for Spencer Cassadine’s (Nicholas Bechtel) birthday party but will also grow suspicious of Jake Doe and assign Shawn Butler (Sean Blakemore) to tail Jake and see what the “stranger” is up to. But shouldn’t Sonny be staying clear of anyone mob-related because of the Avery custody battle? And speaking of that, spoilers reveal that Morgan Corinthos (Bryan Craig) will confront brother Michael Quartermaine (Chad Duell) and try and get him to drop the suit. Michael won’t, he’s intent on taking down Sonny.

Meanwhile, “General Hospital” rumor has it that Ric and Sonny will come to a long-overdue truce and some brotherly forgiveness – aww, that’s what Ric needed all along – his big brother’s love… Could it be that Sonny wants to leverage this somehow to benefit the custody case? Sonny is always looking out for Sonny, so I can’t absolutely buy that it’s a real, true change of heart about Sonny’s half-bro.

Alexis Davis (Nancy Lee Grahn) will tell Julian Jerome (William deVry) that she’s not convinced by Ned Ashton (Wally Kurth) and Olivia Falconer’s (Lisa LoCicero) story about their illicit affair resulting in a pregnancy. Alexis thinks the baby may actually be Julian’s and will encourage him to press for a DNA test, but you know how easy it is to rig one of those – especially at GH.

Nathan West (Ryan Paevey) and Alexis will bring a deal to Nina Clay (Michelle Stafford) with some conditions. Then Franco (Roger Howarth) and Nina will discuss plans for the future now that the LSD cloud is clearing up and Franco is back to himself somewhat.

Nathan meanwhile is wondering if Maxie Jones (Kirsten Storms) will stay with him or go back to her baby daddy Damien Spinelli (Bradford Parson) and will watch her actions with suspicion. But Nathan can’t really do anything about Maxie spending time with Spinelli since they share a kid. What’s a hot cop to do? I say spend as much time as possible shirtless to convince Maxie to stay with him (and even if she doesn’t, we female fans of the show will appreciate the scenery).

Bobbie Spencer (Jacklyn Zeman) will tell Tracy Quartermaine (Jane Elliot) and Lulu Spencer (Emme Rylan) she has no idea what trauma Luke Spencer (Anthony Geary) may have suffered and they’ll turn to Spinelli for answers. A disturbing GH rumor speculates that Luke’s trauma that triggered his DID is that he saw his father repeatedly molesting sister Patricia. Luke then killed their dad and he and Patricia buried him. Everyone assumed the elder Spencer abandoned his family. Perhaps all this went down in the basement of the family home and that’s why Luke was so obsessed with that room. The GH rumors get even more twisted by speculation that Patricia was pregnant by her father and that Luke suffocated the baby and also buried it. Would GH go down that road? They’re pretty fearless about plots, but infanticide? If Geary is looking to leave the show (for good) with a bang, this would be one way to go about it.

Check back with CDL every day this week for more “General Hospital” spoilers, rumors and casting news about what’s going on in Port Charles.