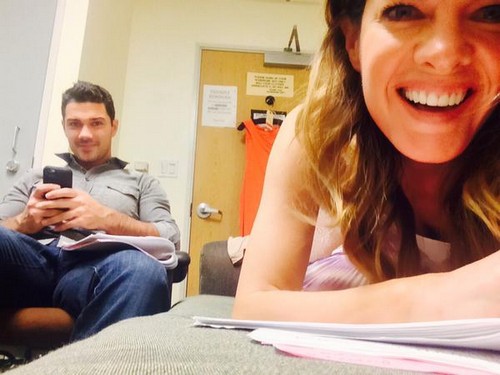 Check out these “General Hospital” spoilers for Tuesday, March 24. Olivia Falconeri (Lisa LoCicero) ran into Julian Jerome (William deVry) on the docks and he wanted to rub her belly. Creepy, right? But then Ned Ashton (Wally Kurth) showed up just in time to belly block Julian and give her Buddha belly a rub himself. And that seemed to rub Julian the wrong way. Julian asks again if the baby could be his and Olivia did deer in the headlights then said no. But… now Olivia is second guessing herself.

Julian just made her feel crappy by telling her he missed out on seeing his other kids as babies – Sam Morgan (Kelly Monaco) and Lucas Jones (Ryan Carnes). Julian will tell Alexis Davis (Nancy Lee Grahn) that he ran into Olivia who is sure her baby isn’t his, but she sees how sad he is. Then over at Kelly’s, Ned will see Olivia looking wishy-washy and ask if she’s having second thoughts about him playing baby daddy since she seems upset.

Alexis may put the screws to Ned to try and get him to admit that he’s not the father of Olivia’s baby. Alexis may get what she wants but then it could cost her something she wants. If Julian has the chance to be with his baby mama and raise a baby, he may ditch Alexis. That’s a case of “be careful what you wish for.” It would be some karmic justice for Alexis to lose Julian if she pushes this baby issue since she tried to baby block Sonny Corinthos (Maurice Benard) from Kristina.

And speaking of plotting to keep people apart, let’s talk about Ric Lansing (Rick Hearst). Jake Doe’s (Billy Miller) mystery “wife” showed up at Liz’s place and insisted on coming in today. Liz Webber (Rebecca Herbst) lets her in out of sheer morbid curiosity and then Hayden Barns (Rebecca Budig) proceeds to unload a stinking pile of lies all over them. She tells a cock and bull story about how she thought Jake left her after an argument and the police wouldn’t take her seriously.

That’s how Hayden explains away that there is no official missing persons report. Liz says she doesn’t buy it and says she and Jake need proof that what she’s saying is true. Well, Ric had to expect that and he is a lawyer with mob ties so he no doubt knows someone who can phony up a marriage license. But what will they do if they ask for a wedding photo? Say they eloped? Say they lost their photos in a house fire? Today, Liz will tell Jake she doesn’t want him to be married.

Meanwhile, Hayden will share a triumphant drink with Ric over at her room at the Metro Court saying she did what he said and the plan looks like it’s going good. We know GH likes to drag it’s feet on major plotlines and “General Hospital” spoilers indicate that Jake’s real identity will not come out until November sweeps! At some point, Liz will realize but won’t spill the beans (likely because she won’t want to lose him to Sam).