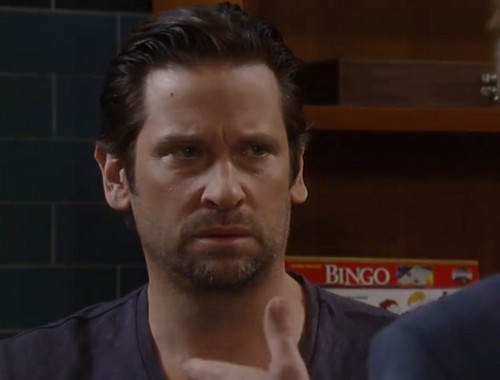 “General Hospital” spoilers and news tease that there are some exciting storylines in the works for the ABC soap – and if the rumors floating around the Internet are any indication, GH fans are in for a real treat. We like to keep a close eye on the soap opera rumors floating around the internet, because nine times out of ten there are some truth to them and they turn in to actual spoilers. Here are some of our favorite “General Hospital” rumors that are currently making the rounds, please keep in mind these are just rumors at this point, and may or may not turn out to be true.

Robin Scorpio-Drake Returns: “General Hospital” spoilers and casting news always seem to be teasing that Robin Scorpio-Drake is on her way back to Port Charles, and Kimberly McCullough makes so many short appearances – there is not telling when she will pop up again. Rumor has it that Robin’s ex-husband Patrick asks Sam Morgan (Kelly Monaco) to move in and the couple settle down with their blended family of Danny and Emma, only to have Robin waltz back into their lives again and throw a wrench in their happily ever after. When Robin sees Patrick (Jason Thompson) and Sam living together as a couple – she might decide to reveal that Sam is still technically a married woman since Jason Morgan is alive.

Morgan & Kiki Save Baby Avery: “General Hospital” spoilers for the ABC soap have made it very clear that Michael will stop at nothing to make Sonny Cointhos (Maurice Benard) pay for the death of AJ Quartermaine (Sean Kanan) – which is why he went to court and got custody of Sonny’s daughter. Rumor has it that Morgan and Kiki Jerome (Hayley Erin) are determined to save Avery from Michael (Chad Duell), and devise a sure-fire plan to convince the court that Michael is an unfit legal guardian. According to the “General Hospital” rumor mill, Morgan drugs his brother Michael by switching his allergy medication and convinces everyone that he has a drinking problem and is not sober, which isn’t exactly a tough sell considering the Quartmermaine Family’s history with booze.

Franco & Nina Move In Together: Franco (Roger Howarth) and Nina (Michelle Stafford) are currently residing at Shadybrooke, but according to “General Hospital” rumors the dynamic duo will be free in no time, and they move in together in a cushiony suite at Metro Court. Why on earth would Carly (Laura Wright) or Olivia ever let Franco move into their hotel? Well, the GH rumor mill teases that Franco blackmails Olivia (Lisa LoCicero) and threatens to reveal who her real baby-daddy is (Julian Jerome), unless she gives him and Nina a place to live. When Olivia still thought Franco was nuts she foolishly revealed the truth to him during a visit to Shadybrooke.

Rebecca Budig Stays In Port Charles: When “General Hospital” spoilers and casting news confirmed that AMC alum Rebecca Budig was headed to Port Charles to stir up trouble and pose as Jake Doe’s wife Baily, we were thrilled! However, no one from the ABC soap has actually confirmed for how long Rebecca Budig will be in town. Rumors are floating around the internet that Budig is in it for the long haul and after she is done tormenting Jake (Billy Miller) and Liz (Rebecca Herbst), she gets involved with some drama at ELQ and possibly even Nikolas Cassadine – at least he’s rich!

Luke Spencer Killed His Mother: The Luke Spencer/Fluke (Anthony Geary) storyline has tormented GH fans for months, spoilers tease that we are just weeks away from the big reveal on the ABC soap and we will finally learn what tragic occurrence in Luke’s childhood caused him to develop disassociate identity disorder and torment the residents of Port Charles. It’s no secret that Luke’s childhood was a rough one and he was tormented by his drunk and abusive father. According to the “General Hospital” rumor mill, the reason Luke Spencer finally snapped is because he has been keeping a dark secret – and the guilt was eating him up alive. A speculation explained by Soap Opera Spy is that Luke Spencer accidentally killed his mother with the infamous baseball bat in the basement of the Bill Eckert house, when he was fighting with his drunk father and swinging the bat at him.

So GH fans, what do you think of all of the exciting rumors?  Did Luke really kill his own mother by accident leading to a lifetime of ineffectively suppressed guilt? Are you as excited as we are to have Franco and Nina back in Port Charles stirring up drama? Will Kiki and Morgan successfully frame Michael and get back custody of Avery? Rumors are that the GH writers will drag out the Jason Morgan storyline until November 2015 before they finally reveal he is alive – say it ain’t so! Do you want Robin to return, or do you like the idea of Patrick and Sam moving in together? Let us know what you think in the comments below and don’t forget to check CDL tomorrow for more “General Hospital” spoilers and news.