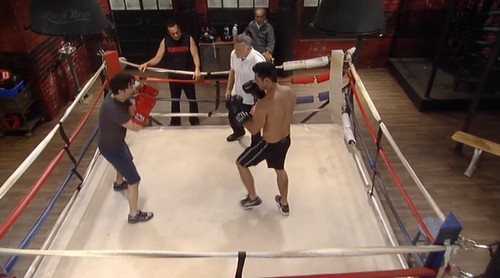 Thankfully, we’ll got some closure on Friday’s cliffhanger on Monday’s show. Here’s a look at some “General Hospital” spoilers for Monday, March 23. After Maxie Jones (Kirsten Storms) went to Lulu Falconeri (Emme Rylan) for help deciding between her two loves, she heard from Dante Falconeri (Dominic Zamprogna) that Damien Spinelli (Bradford Anderson) and Nathan West (Ryan Paevey) are boxing for her favor, she rushes to the gym. On Monday, Maxie will show up just in time to see Nathan deliver a lights out blow to her baby daddy.

Maxie will be furious with both for using her as a prize in their prize fight without her consent and even more so at Nathan for getting into the ring with Spinelli knowing he would beat him senseless. Nathan’s best defense will pretty much be “he started it” but that won’t hold water with Maxie. And Maxie will think about how brave Spinelli was to get into the ring at all knowing he would be thrashed.

Also, Michael Quartermaine (Chad Duell) will tell Morgan Corinthos (Bryan Craig) that he will never be part of baby AJ’s life. They may even come to blows over their baby sister. This will spur both Morgan and Kiki Jerome (Hayley Erin) to advance their plot to make Michael look like a drunk and/or drug abuser and have him labeled an unfit parent. Kiki and Morgan’s plan will have a few facets.

First, Morgan will switch Michael’s regular allergy pills with a roofie of some sort. These will make him loopy and when he has a drink, it will push him far over the edge. Next, Morgan will begin spreading stories to remind everyone in Port Charles that AJ Quartermaine was a drunk and his dad Alan Quartermaine had a pill problem.

Morgan won’t leave out Monica Quartermaine (Lesley Charleson) and will recall she had her own substance abuse issues as well. The upshot is that child services will be called and Michael will look like a sot. The other prong of their plan is wrapped up in Julian Jerome (William deVry) who will agree to help Kiki get custody of her sister.

Also, Ava Jerome (Maura West) will beg Silas Clay (Michael Easton) to euthanize her and put her out of her cancerous misery. Of course, Silas will not want to do this and this will lead Silas to pursue some unusual avenues looking for a donor to cure Ava of her advanced stage cancer. If Julian and Kiki end up with custody of baby Avery, that would make a donation a no-brainer. So will Silas throw in with them on the custody case?

Friday, we saw that Liz Webber (Rebecca Herbst) was ready to head upstairs and get horizontal with Jake Doe (Billy Miller) but then there was a knock on the door. It’s Hayden Barns (the long awaited debut of Rebecca Budig) who claims to be Jake’s wife. Liz will have her doubts about this stranger’s claims and so will Jake. When Carly Corinthos (Laura Wright) hears, she will be shocked and disbelieving.

This is all, of course, the plotting of Ric Lansing (Rick Hearst) and he will be confident about his triumph. Then again, Ric is always so sure of his dastardly plans right up until the moment that they fail (as they always do). Carly’s doubts alone could wreck the plan and you have to wonder if Carly won’t recognize the stench of Ric on this whole all-too-convenient wife appearance.

Now that Franco (Roger Howarth) was told by dad Scotty Baldwin (Kin Shriner) that he needs to stay “crazy” so he can be safe in Shadybrook and Nina Clay (Michelle Stafford) has been told she needs to get serious or she’ll be stuck there for good, the two will come up with a new plot to escape from Shadybrook together. But where will they go?