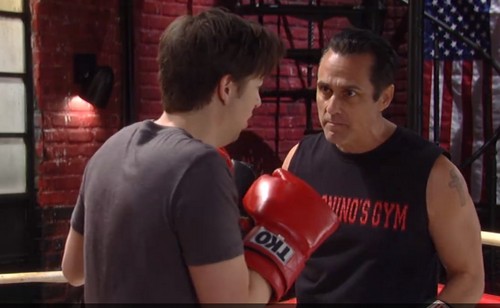 Friday is cliffhanger day in Port Charles and these “General Hospital” spoilers will have you ready for the ABC soap for Friday, March 20. It’s the first day of Spring and there’s all kinds of trouble blooming in Port Charles. Now that Damien Spinelli (Bradford Anderson) has inexplicably challenged Nathan West (Ryan Paevey) to a boxing match for the right to have Maxie Jones (Kirsten Storms), Sonny Corinthos (Maurice Benard) will prepare The Jackal for his big fight. Unfortunately, Nathan has 50 pounds of muscle and lots of skill on Spinelli, but Sonny knows the sweet science. Could having the mob boss in Spinelli’s corner help? Nah.

Today, Sonny will do a little sparring with Spinelli to help him prepare but, most importantly, will tell him he’s got to get uber-aggressive and be a killer in the ring. The Jackal? Maybe he can annihilate a security system or destroy a computer virus, but he’s got zero chance of making a dent in Nathan. Meanwhile, Maxie will run into Dante Falconeri (Dominic Zamprogna) today and he’ll tell her about he fight. She will not happy to be a prize in a fight or that Nathan is planning to beat on her baby-daddy. Maxie will run to the gym to check it out, but that fallout won’t unfold until Monday.

On the Fluke/Luke Spencer (Anthony Geary) front, we’ve got some action. Tracy Quartermaine (Jane Elliot) will come to tell Lulu Falconeri (Emme Rylan) that she chased down Patricia Spencer’s (Dee Wallace) forwarding address. Lulu and Tracy will head to confront Pat about Luke’s troubled past but they won’t find Luke’s big sister – instead they find a new family member – Patricia’s daughter! She will demand to know what they want with her mom.

They will make a little headway with Luke’s niece today, but the big story won’t come out until April 1st when “General Hospital” spoilers indicate we’ll finally find out the truth about the trauma that caused Luke’s DID. We’ve also got some action on the Ava Jerome (Maura West) front. She’s not looking too good and asks Silas Clay (Michael Easton) if she’s getting better or worse. Looks like worse and she’ll ask Silas for her help. Is Ava ready to consider trying to use baby Avery as a bone marrow donor?

Today will also be lawyer visitation day at the Shadybrook loony bin. Alexis Davis (Nancy Lee Grahn) will come to see Nina Clay (Michelle Stafford) and Scott Baldwin (Kin Shriner) will come to see his son Franco (Roger Howarth). They each have things to confess to their attorneys and neither of the pretend lunatics may get the news they want. Franco will make some confessions to Scotty – hopefully one will be that he wants to avenge him for Luke’s attack.

Scotty will tell Franco that he’s not getting out of Shadybrook anytime soon (if at all). To be fair, even once the tumor was out of his noggin, Franco has made some questionable choices. Nina will push attorney-client privilege to the max when Alexis tells her that time is up. Nina confesses she hasn’t really had a wacko relapse but just wanted to hang in the nuthouse with her honey Franco. One Alexis gets past the eye roll, she’ll go back to court to make some surprising moves on behalf of Nina.

And, after that long awaited smooch between Jake Doe (Billy Miller) and Liz Webber (Rebecca Herbst), Jake gets real and tells Liz in no unequivocal terms that he wants her. Liz already made it plain that she’s all in so what could get in their way? Hmm. Let’s see. How about Ric? The duo will be interrupted today by new character Bailey (Rebecca Budig) who will claim to be Jake’s wife.