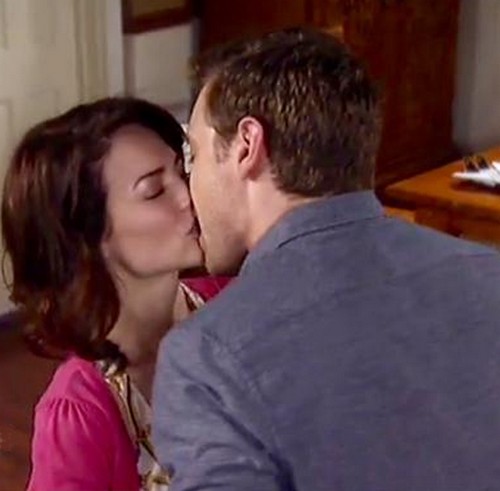 If you can’t wait for today’s episode of GH, check out these “General Hospital” spoilers for the ABC soap for Wednesday, March 18. Today we’ll finally see some action on the Spencer Cassadine (Nicolas Bechtel) burn storyline. Finally! Nikolas Cassadine (Tyler Christopher) will be happy when Emma Drake (Brooklyn Rae Silzer) comes to visit Spencer. She’ll be a sight for sore eyes since she and Spencer had just had their sweet little romantic dance right before he got injured.

Remember she felt so horribly guilty about Spencer getting hurt and told her dad Patrick Drake (Jason Thompson) that she should have got help faster. Patrick reassured her then and Nikolas will tell her she did a great job alerting them and will let her know she shouldn’t feel bad and that she’s a good friend so Spencer.

Meanwhile Spencer will be worried that the scars on his face will be permanent and will mar his good looks. This will be a good chance for dad Nikolas to tell him that looks aren’t the most important thing in the world and that all the people who love him will love him anyway. I’m also sure they’ll work in another plug for the good work they do for burn victims at Shriner’s Hospital for Children.

Related to the Spencer storyline, you’ll recall that Cameron Webber (Michael Leone) was actually responsible for the fire when he knocked over a gift bag into a large candle. By now, Cameron has had the chance to think back on that night and how he and Josslyn Jacks (Hannah Nordberg) flounced out of Spencer’s shindig and how his carelessness hurt his arch-rival and could possibly have killed Spencer.

This realization has been eating at Cameron who will scare his mom Elizabeth Webber (Rebecca Herbst) by saying he needs a lawyer. Cameron’s revelation will have Liz worried that Nikolas may be angry with her for Spencer’s injuries. Liz will then turn to Jake for comfort and “General Hospital” rumors indicate these two will finally get the kiss they’ve both been aching for, but whatever small happiness they find will be short lived as they will be interrupted.

And speaking of Liz, her recent ex Ric Lansing (Rick Hearst) is not taking the split well. It was bad enough that he was licking his wounds, but when he ran into Carly Corinthos (Laura Wright) at the MetroCourt bar, she basically told him that he deserved his heartbreak for being such an evil bastard (not that she was entirely wrong).

But we all know that Ric already has a tendency towards self-pity and Carly’s harsh words drove him to the “poor me” station on the fast track. Ric will be moping around today when his daughter Molly Lansing-Davis (Haley Pullos) will try to comfort her dad. Of course it won’t work and Ric will do what he always does when he doesn’t get his way – he’ll plot a way to cheat his way into getting what he wants – this will lead to him hiring Bailey (Rebecca Budig) to show up in town by Friday to pretend to be Jake’s long lost wife.

In other news of broken hearts and rivals, Damien Spinelli (Bradford Anderson) will challenge Nathan West (Ryan Paevey) to a duel over fair Maxie Jones (Kirsten Storms). The Jackal may have been hoping for more of an intellectual challenge, but “General Hospital” gossip indicates the duo will end up in the boxing ring. Of course, Spinelli will take a beating (what was he thinking?). Perhaps he is hoping Maxie would feel bad that Nathan gave him an epic beat down and get back with him. And it just may work. But before the beat down, Spinelli will get some romantic advice from Sonny Corinthos (Maurice Benard).

Don’t miss today’s General Hospital – there’s a lot going on. After the show, check back with CDL for discussion and spoilers for Thursday’s episode of “General Hospital” along with casting news and gossip.