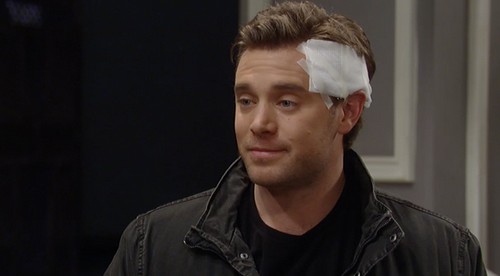 “General Hospital” spoilers for the week of March 16 – 20 tease a week full of exciting drama on the ABC soap, rumor has it GH fans will not want to miss a single episode. Not that there is ever an uneventful week in Port Charles, but this week the mob drama will escalate and there will be some new information revealed about Luke Spencer (Anthony Geary) and his mysterious past. According to “General Hospital” spoilers, this is what GH fans can expect to see during the week of March 16.

Monday March 16: “General Hospital” spoilers tease that on Monday’s episode of the ABC soap, Sonny Corinthos will come face to face with Jason Morgan (Billy Miller), aka Jake Doe. Meanwhile across town, Duke Lavery (Ian Buchanan) is suspicious of Jordan (Vinessa Antoine) and decides to test her loyalty by ordering her to take out a hit on Julian Jerome, Julian (William DeVry) will be busy taking out a mob hit of his own – unaware that he has a target on his back.

Tuesday March 17: According to GH spoilers for Tuesday’s episode of the ABC soap, Lucy and Duke will have a long overdue chat about their status and their feelings for each other. Also, Morgan and Kiki (Hayley Erin) conspire against Michael (Chad Duell), and there is a new member of the Jerome crime family inducted by Julian, watch out as Jake enters the Ninja.

Wednesday March 18: “General Hospital” spoilers tease that on Wednesday March 18th Carly (Laura Wright) fills Jake Doe in on some interesting information about Elizabeth – who is busy worrying about her son Cameron. GH fans can also expect to see Maxie’s (Kirsten Storms) complicated love life get even more complicated when she makes an emotional confession to Nathan (Ryan Paevey).

Thursday March 19: March 19th’s episode of General Hospital will feature a heated conversation between the men in Maxie’s life, and sparks fly when Nathan gives her baby-daddy Spinelli (Bradford Anderson) an ultimatum. GH fans who are hoping to see Liz (Rebecca Herbst) and Jake together will definitely want to tune in on Thursday’s episode of the ABC soap when Jake comforts Liz, and tries to ease her worries about Cameron.

Friday March 20: “General Hospital” spoilers and coming and going news tease that Dee Wallace will make her Port Charles debut as Luke Spencer’s (Anthony Geary) mysterious sister Patricia. On Friday Luke’s daughter Lulu (Emme Rylan)and Tracy (Jane Elliot) will meet Patricia, and learn some information about Luke’s past that could shed some light on his reign of terror as Fluke.

So “General Hospital” fans, do you think that Jordan will follow through with Duke’s order and take out Julian? What are Morgan and Kiki planning for Michael? What do you think Patricia will have to say about Luke’s childhood? Let us know what you think in the comments below and don’t forget to check CDL tomorrow for more “General Hospital” spoilers and news.