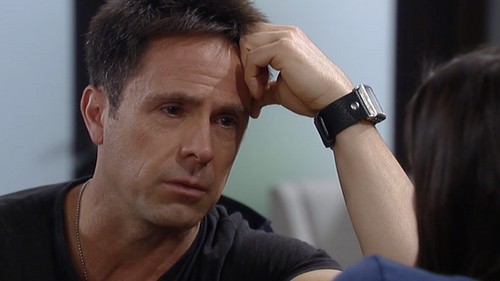 Check out these juicy “General Hospital” spoilers for our favorite ABC soap for Tuesday, March 17. First let’s start with a big fat Nurses’ Ball spoiler. Lucy Coe (Lynn Herring) will chat up Sabrina Santiago (Teresa Castillo) about last year’s Nurse’s Ball and what went down with her son Gabriel and then how Sabrina lost Patrick Drake (Jason Thompson) in the aftermath of the disaster. Sabrina will tell Lucy that she thinks about her son Gabriel every day.

Sabrina will tell Lucy she can’t do the Nurse’s ball this year because she no longer works for GH and will tell Lucy she was fired. Lucy says it doesn’t matter so long as Sabrina is still a nurse, she can still participate. Lucy tells Sabrina that since she almost single-handedly revived the event that she deserves to participate. Lucy also credits Sabrina as being her inspiration and will beg her to perform this year – and Sabrina says yes!

But that’s not the only Lucy “General Hospital” gossip we’ve got for you. Lucy and Duke Lavery (Ian Buchanan) will talk about their relationship but is it a conversation about that New Years’ kiss or is it a conversation about the ballot box? One is romantic, one is criminal, but in Port Charles, these two overlap and there’s no telling what Lucy is willing to get up to and Duke is always trouble. It will be interesting to watch. Maybe Lucy will bring Duke as her date to the Nurse’s Ball. What do you think?

Also today, “General Hospital” spoilers indicate that Julian Jerome (William deVry) will meet with Jake Doe (Billy Miller) about the job opportunity with his organization. But here’s the rub there. Sam Morgan (Kelly Monaco) specifically asked her pop Julian to put Jake to work in one of his legitimate businesses like the gallery or publishing arm, but Jake has to get into the criminal part to satisfy his agreement with Commissioner Sloane (Grayson McCouch).

So now Jake will have to find a way to weasel his way into the mob side of Julian’s life without raising his suspicions. The good news is, Jake may be able to throw some shade at Sonny Corinthos (Maurice Benard) based on Sonny telling Jake that he’s now his official enemy to try and get his foot in the door of Julian’s shadier stuff. Jake may be an amnesiac, but he’s no fool so he should have no trouble getting what he wants. The question is, how will Julian explain to Sam that he didn’t comply with her wishes.

Carly Corinthos (Laura Wright) walks in on Sonny giving Jake the friend of my enemy is my enemy speech and will try to calm him down. Carly doesn’t want to come outright and tell Sonny that Jake is working for Sloane – Jake being a snitch will go over about as well as Jake working for Julian. But she will try to get him to back down and convince him that Jake had nowhere else to turn for work and that she’ll make sure he doesn’t damage Sonny’s organization. Sonny won’t be convinced.

Duke will be the next of Sonny’s allies to go confront Michael Quartermaine (Chad Duell) about him taking custody of baby Avery (aka baby AJ). Duke will accuse Michael of not caring about the baby, being selfish and punishing Sonny through this custody maneuver. Michael, as is typical of him, will not back down for a moment and will give it back to Duke with both barrels. To be fair, as a career criminal, Duke doesn’t have the right to throw shade at Michael. This will not go well.

And speaking of Michael, his brother Morgan Corinthos (Bryan Craig) will plot with Kiki Jerome (Hayley Erin) to come up with a scheme to get baby Avery back from Michael and to punish him for his antics. Kiki’s still steaming that Michael has hired Sabrina as little AJ’s caregiver so she’s ready to get her hands dirty. Morgan will tell Kiki that since Michael is playing dirty, they need to as well. Kiki will agree. But what will they do? Kiki will bring in her Uncle Julian to help them take down Michael.

On Monday, Anna Devane (Finola Hughes) confessed to Nathan West (Ryan Paevey) that Jordan thinks her cover is blown and she wants to come out. Anna is firm that she wants to leave her asset in play until Nathan tells Anna flat out he thinks she’s pushing Jordan because of her feelings over Duke. That breaks Anna and she agrees. Jordan shows up in a panic. Today she’ll tell Nathan and Anna that Duke ordered her to kill Julian and Anna won’t want to believe it.

Nathan will then work hard to come up with a plan to help get Jordan out of this tight spot so that they can still shut down the mob war without her getting hurt. But on a side note, since Sloane told Anna that he has a CI, Nathan is going to poke around at work and try to figure out who Sloane has working for him undercover so that Jordan isn’t put more at risk. This one’s a real nail biter.

And one last bit of “General Hospital” gossip – Molly Lansing-Davis (Haley Pullos) will try to comfort her dad Ric who is very upset that Liz Webber (Rebecca Herbst) ditched him in favor of bad boy Jake. As sweet as it is, Molly’s efforts won’t work and Ric will delve into full-on plotting to get rid of Jake that will culminate in him hiring a fake wife for Jake – Rebecca Buddig – who will show up on Friday playing Bailey.

Today’s General Hospital is not to be missed. Be sure to watch then check back with us here at CDL for tons more “General Hospital” spoilers, news and gossip.