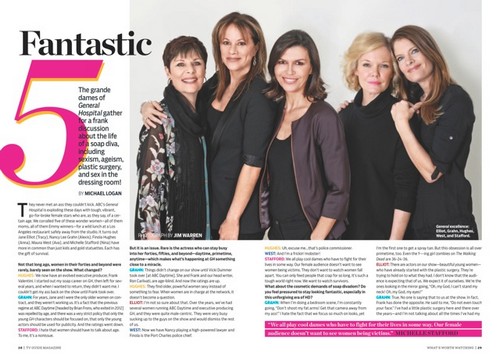 “General Hospital” spoilers presents the ladies of GH revealing all sorts of steamy secrets including having sex on the set!  “General Hospital” actresses Finola Hughes, Jane Elliot, Maura West, Michelle Stafford, and Nancy Grahn dish on all things GH in their new, extremely hot and revealing TV guide interview! The soap has built a stellar cast over the last few years, and the ABC soap even has major big name stars from other network’s daytime dramas lining up to get chance to shine in Port Charles. Any soap fan will confirm that “General Hospital” has by far some of the strongest and most badass female characters of any of the remaining daytime dramas. TV Guide recently sat down with five of GH’s leading ladies for an exciting no-holds bar interview about their rise to the top on daytime genres and how they manage to juggle the stresses of a grueling soap schedule and their everyday lives and families.

CDL got an exclusive sneak peek of TV Guide’s exciting new interview with Finola Hughes, Maura West, Nancy Grahn, Jane Elliot, and Michelle Stafford. We can confidently say that this is one interview you will not want to miss. The “General Hospital” spoilers reveal the actresses dished on everything from their opinions of social media, sex on the set of the soaps, their families, and the sexism they have experienced while trying to make a name for themselves in the soap opera genre.

Jane Elliot, who plays the part of Tracy Quartermaine, has always spoke openly about how poorly she was treated at the ABC soap when she first landed the role many years ago. In the all new TV Guide interview, Elliot explains, “Over the year we have had several women running ABC Daytime and executive producing GH, and they were quite male-eccentric. They were very busy sucking up to the guys on the show and would dismiss the rest of us.” Wow, if that doesn’t sound like a not-so-subtle jab at Jill Farren Phelps then we’re not sure what does.

On a more lighter topic, the daytime divas also discussed their Twitter accounts and how they feel about crazed fans attacking them on social media and calling them “fat cows.” Spoiler alert: they don’t like it! Elliot on the other hand has boycotted Twitter all together, and thinks that Nancy Grahn should take a page out of her book and do the same and “unplug.” Maura West has five children at home, so she literally turns her phone off when she walks through the door so she can give her family her full attention. Maura wasn’t always a family woman – and in TV Guide’s interview she dishes on dressing room hook-ups on the set of As The World Turns. Nancy Grahn even reveals that in the 1980s she had sex with one of her co-stars on both the Santa Barbara set and the “General Hospital” set!

Basically, there was no topic that Finola Hughes, Jane Elliot, Maura West, Nancy Grahn, and Michelle Stafford wouldn’t touch – except for of course which one of them made the most money. All and all we would say the new TV Guide interview is a must read. It is always fun to hear what our favorite actresses have to really say when they are not reading from a script – and are totally uncensored! Come back to CDL often to read our “General Hospital” spoilers, rumors and news!