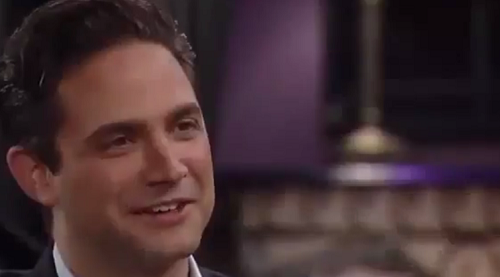 “General Hospital” spoilers tease that the Tuesday, January 20 episode of the ABC soap will be an action-packed one. GH fans will not want to miss a single second of the exciting episode. When “General Hospital” casting news confirmed that Brandon Barash would be returning to Port Charles as Johnny Zacchara, spoilers teased that he would be stirring up some major drama, and he is doing just that!

The “General Hospital” spoiler video for January 20 teases that Dante and Lulu’s relationship will continue to be put to the test by Johnny Zacchara’s return to Port Charles. In the all new GH promo video for Tuesday’s episode of the ABC soap, Dante heads to the bar to drink away his sorrows over his latest disagreement with Lulu and confesses to Nathan (Ryan Paevy) that he has a problem with his wife’s new business partner. Meanwhile, a confused Olivia questions Lulu (Emme Rylan) and asks her, “what could you possibly have to fight about.” Unbeknownst to Nathan, he should probably be worried about his own relationship and not coaching Dante through his problems, because “General Hospital” spoilers tease Johnny Zacchara has an intense conversation with his new love interest Maxie Jones.

In other “General Hospital” news, the Fluke (Anthony Geary) storyline will continue to pick up steam going in to the January 20th episode of the ABC soap. In the “General Hospital” spoiler video, Sonny confides in Julian that he thinks he knows who Fluke is. Meanwhile, Fluke meets with Helena Cassadine and she fills him in on the hit she took out on Sam Morgan by her “soldier,” AKA Jason Morgan (Billy Miller). The Sneak peek video for January 20 also shows Jason creeping into Sam’s bedroom with his gun drawn while his wife makes love to Patrick Drake (Jason Thompson).

So, GH fans, do you think that Dante has anything to be worried about, would Lulu risk her marriage to flirt with Johnny Zacchara (Brandon Barash) and work with him? What about Maxie? Will Jason Morgan kill Sam and Patrick, or will he break free of Helena’s mind control in the nick of time? Let us know what you think in the comments below and don’t forget to check CDL tomorrow for more “General Hospital” spoilers and news.