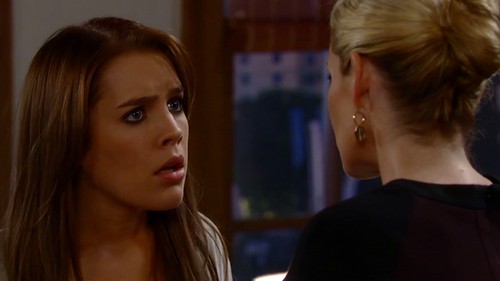 “General Hospital” spoilers and casting news revealed earlier this week that Kristen Alderson was leaving the ABC soap, and her stint as Kiki Jerome had officially come to an end. Although at first GH fans assumed it was just another rumor, Kristen Alderson and her boyfriend Chad Duell both confirmed the news on social media. Rumors began flying that Alderson was quitting “General Hospital” to join “Days of Our Lives” or “Bold and the Beautiful,” but the actress quickly released a video explaining that her decision was “spur of the moment” and she was not joining another soap opera, she just wanted to pursue other things.

Although Kristen Alderson has confirmed she is leaving “General Hospital,” no one form the ABC soap has actually spoken about the news or revealed the fate of Alderson’s character Kiki Jerome. Like Alderson said I her video to GH fans, her decision was “spur of the moment,” and she has left the GH writers in a lurch. The actress’s character Kiki is currently embroiled in one of the soap’s main storylines – her mother Ava Jerome was just arrested for murder, she volunteered to take care of her new baby sister Ava, and she was in the process of reconciling with her old flame Morgan Corinthos (who coincidentally just broke up with her mother Ava).

Seeing as how the character Kiki Jerome still has plenty of loose ends to tie up and storylines to play out, there is a very good chance that TPTB at “General Hospital” are recasting the role. And, that would explain why they haven’t officially addressed the fans or released any statements on Alderson’s departure. They may be waiting until they know for sure if Kiki Jerome is exiting for good – or they have a new actress to replace Kristen Alderson with.

What do you think GH fans? Should “General Hospital” write out the character of Kiki Jerome – or recast the role and replace Kristen Alderson? What actresses would you like to see take on the part? Let us know what you think in the comments below and don’t forget to check CDL tomorrow for more “General Hospital” spoilers and news.