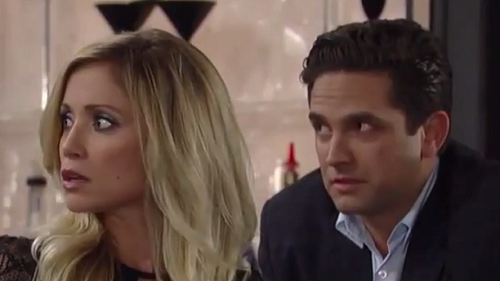 “General Hospital” spoilers tease that the episode of the ABC soap airing on Friday, January 16 will be an eventful one and according to the rumor mill – GH fans will not want to miss a single episode.  Now that Sonny Corinthos and Julian Jerome have found common ground over a mutual enemy – the race to take down Fluke and expose the Luke Spencer imposter’s true identity is on.  This week Sonny (Maurice Benard) filled his hitman Shawn in on Fluke and told him the war is on.  In the “General Hospital” spoiler video for Friday’s episode of the ABC soap Shawn is on the job, and can be seen sneaking around the Bill Eckert house and spying on Fluke (Anthony Geary).

In other “General Hospital” news,January 16 will be an eventful episode for some of our favorite GH couples.  Lulu and Dante’s marriage is in serious jeopardy now that Johnny Zacchara is back in the picture, and in the promo video for tomorrow’s episode, Dante and Johnny can be seen screaming at each other over Lulu – and the fact that Johnny (Brandon Barash) just can’t seem to stay away from her.  Meanwhile, Sam and Patrick’s relationship seems to be right on track, and in the January 15th sneak peek of “General Hospital,” Patrick (Jason Thompson) shows up at Sam’s door with wine and flowers.

This week on “General Hospital,” Helena ordered Jake aka Jason Morgan (Billy Miller) to kill his wife Sam – but it looks like someone might figure out what he is up to before that happens.  In the GH spoiler video for Friday’s episode, Elizabeth stumbles across Jake with a gun and demands to know what he is doing.  “General Hospital” spoilers for January 15th also tease that GH fans can expect to see Sonny Corinthos vow to save the real Luke Spencer while he is chatting with Julian Jerome (William DeVry) in Pentonville.

So, GH fans, do you think that Shawn is really capable of taking down Fluke?  Would Lulu really risk her marriage for Johnny Zacchara, or is Dante over reacting?  Will Elizabeth figure out that Jake really is dangerous and is planning to kill Sam?  Let us know what you think in the comment below and don’t forget to check CDL tomorrow for more “General Hospital” spoilers and news.