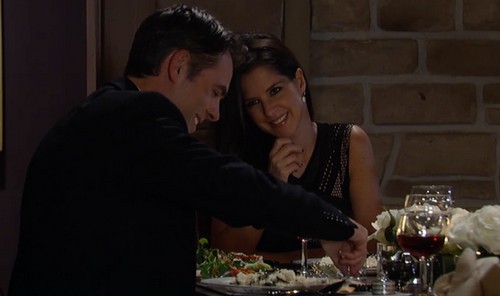 “General Hospital” spoilers for the week of January 19-23 tease some crazy drama in Port Charles and according to GH rumors floating around the internet – fans will not want to miss a single episode of the ABC soap. “General Hospital” spoilers recently revealed that mobsters Sonny Corinthos (Maurice Benard) and Julian Jerome would be working together to bring down Luke Spencer’s imposter Fluke (Anthony Geary) – and hopefully finally reveal his true identity. During the week of January 19, the new dynamic duo comes one step closer to exposing Fluke when they learn who has been working with the villain.

In other “General Hospital” news, spoilers for January 19-23 tease that the residents of Port Charles will also come one step closer to discovering the true identity of the mysterious “Jake.” Helena Cassadine recently ordered Jake to take out a hit on Sam, who he has no idea is actually his wife. According to “General Hospital” spoilers in the latest edition of Soap Opera Digest, during the upcoming week of the ABC soap something will happen that triggers Jake’s memory, and brings him one step closer to realizing he is Jason Morgan. Meanwhile, Sam might figure it out before Jake (Billy Miller) – because on January 21st the soap magazine teases that she “makes a perplexing discovery.”

“General Hospital” spoilers for the week of January 19 also tease that GH fans can expect to see real life couple Kristen Storms and Brandon Barash share some scenes as Maxie and Johnny Zacchara come face to face. Also, Michael Corinthos (Chad Duell) could be in serious danger with Fluke and his conquest to purchase the Bill Eckert house – and he doesn’t even know it! Spoilers tease that Sonny Corinthos tries to reach out to Michael for the first time since he went to prison to warn him, but Michael refuses to listen to him.

So, GH fans, it looks like we are getting closer and closer to the big Fluke reveal, any last minute guesses on who the impostor really is? Do you think Sonny and Julian (William DeVry) will be able to take him down – or is he even too powerful for them? Will Jake actually try to kill Sam or will he realize that he is under Helena’s mind control before it is too late? Let us know what you think in the comments below and don’t forget to check CDL tomorrow for more “General Hospital” spoilers and news.