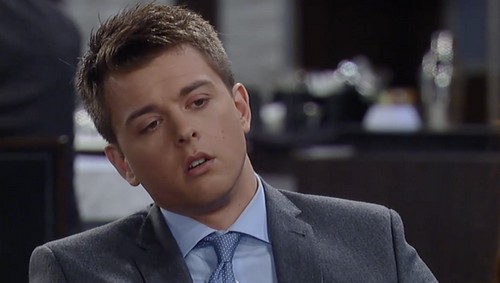 Tuesday’s GH was heavy on the Quartermaine drama and there’s more to come! Check out these hot “General Hospital” spoilers for the Wednesday, April 8 episode. When we saw Jake Doe (Billy Miller) on Tuesday, he overheard Julian Jerome (William deVry) and Carlos Rivera (Jeffrey Vincent Parise) talking about a hit on someone high up in the Corinthos mob family. Like a good CI, Jake immediately called Commish Sloane (Grayson McCouch) and left a voice message. When Sloane calls back, Jake will tell the chief about the hit and Sloane will push Jake to dig in and find out more.

Meanwhile, Carly Corinthos (Laura Wright) will get wind that Jake reported a hot tip to the Commish and wants Jake to tell her too. She’ll push, but will he blab? Likely not, but then again, she is his only ally in the world. Is it Sonny Corinthos (Maurice Benard) that Julian is plotting to take out? Likely not. Look for the hit to be against Duke Lavery (Ian Buchanan).

There are major “General Hospital” rumors that Ian Buchanan is leaving. Gossip is swirling that it will be Anna Devane (Finola Hughes) that will shoot and kill Duke – NOT a Jerome hit man – around the time of the Nurse’s Ball. She’ll be devastated at killing the man she loves, but it seems like his exit is a done deal. Shame…

Meanwhile, Liz Webber (Rebecca Herbst) asks Ric for the truth before she agrees to reconcile with him. Ric will think Liz is about to ask him about Jake and he’ll consider (briefly) coming clean, but when Ric realizes that’s not what Liz is asking, he’ll brush aside any guilt and says what he has to in order to get a second chance with his lady love.

We’ll also see Valerie Spencer (Brytni Sarpi) threatening Luke Spencer (Anthony Geary) with a little knife she snuck in just as Lulu Spencer (Emme Rylan) wonders to Dante Falconeri (Dominic Zamprogna) whether a grieving Valerie is dangerous. She is. But the question is, will Luke actually be open to her threats and want her to finish him off so no one else can be harmed in case the side of him that’s channeling his violent dad Tim Spencer re-emerges? Maybe he’ll want to be euthanized!

When a drugged Michael Quartermaine (Chad Duell) chases Sonny away from baby Avery, Sonny will be equally worried about Michael and Avery both. He’ll tell Carly the outrageous behavior he observed and they’ll try to figure out what’s going on. Sabrina Santiago (Teresa Castillo), being a nurse, may recognize the symptoms of a medication interaction or could check out his allergy pills and notice they’re not what he was prescribed.

And now that Hayden Barnes (Rebecca Budig) knows that Nikolas Cassadine (Tyler Christopher) knows who Jake really is, she’ll be able to turn the tables on Nik. Those two will align together since what Hayden wants is sex, money and a good time – not a husband. She’ll agree to work with Nik and keep Jake in the dark after she gets Nik into the sack. This will pay off long run and once Ric’s lame plot falls apart, we can expect to see Hayden living at Wyndermere with Nikolas.

Valerie won’t off her uncle no matter how angry she is and that will set Luke up for an exit to get treatment for his mental condition. Luke’s exit could very likely be permanent which will free Tracy Quartermaine (Jane Eliot) up to focus on ELQ and helping Michael fight off Nikolas corporate raiding plot. If Luke is mentally incompetent, as his wife, she should control the shares he obtained.