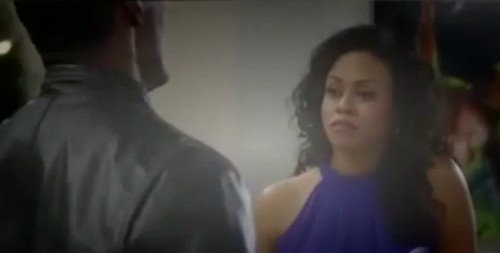 General Hospital spoilers tease that the week of December 22 – 26 will be full of exciting drama and GH fans will not want to miss a single episode. There is never a dull day in Port Charles – but the holidays seem to bring out even more drama than usual. On December 19 the ABC soap was pre-empted by special news coverage, so that episode will air on Monday December 22, on December 26 a re-run was set to air, however now an all new episode will air since the news coverage pushed everything back a day. According to General Hospital spoilers, this is what GH fans can expect to see during the week of December 22.

Monday December 22: General Hospital spoilers tease that on December 22nd Franco and Nina head to court to learn their fates, with Alexis at their sides. Meanwhile across town Morgan is devastated when Ava’s baby’s DNA test results come back. It looks like Carly is a step-mom…again.

Tuesday December 23: On Tuesday’s episode of the ABC soap, Carlos threatens Jordan – and Shawn worries that TJ’s mom is in serious danger. The Port Charles mob war continues to heat up in Pentonville, and General Hospital spoilers tease that Johnny Zacchara “helps out” another inmate and settles an old debt. Meanwhile, Nathan and Maxie receive news about her daughter Georgie and the status of her case.

Wednesday December 24: Christmas Eve is Port Charles is magical and emotional as always, spoilers tease that Obrecht reads the traditional Christmas story to the children. Meanwhile, it’s a Christmas miracle for Maxie, and rumor has it she finally gets to see her daughter Georgie, courtesy of Nathan’s mother. General Hospital spoilers also tease that Jake and Liz grow closer…however someone walks in on them and kills the moment.

Thursday December 25: General Hospital will be pre-empted by holiday specials and an episode will not air on Christmas day.

Friday December 26: General Hospital spoilers tease that Jake and Liz’s new relationship is strained when someone from her past asks her out on a New Years Eve date. Rumors have been running rampant that a love triangle is in the works between Liz, Jake, and back-from-the-dead Ric Lansing. Meanwhile, Anna has a serious talk with Jordan and pleads with her not to blow her cover, and Maxie and Nathan’s magical Christmas hits a major roadblock.

So GH fans, what do you think of Jake and Liz growing closer over the holidays? Do you like them together, or do you want Jake/Jason reunited with Sam? Will Liz wind up back with Ric Lansing? Is Jordan in serious danger, will she be killed off? Let us know what you think in the comments below and don’t forget to check CDL tomorrow for more General Hospital spoilers.