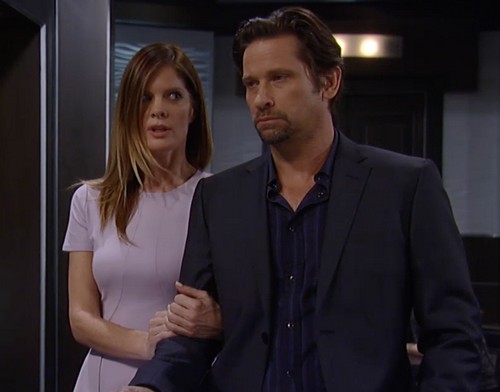 Check out these “General Hospital” spoilers for the Monday, March 30 episode. Looks like Monday will be action-packed in Port Charles – and there are some shockers in store. On Friday’s episode Tracy Quartermaine (Jane Eliot) and Bobbie Spencer (Jaclyn Zeman) went over to the Oak Hill rest home where they concluded that Patricia Spencer (Dee Wallace) was convalescing. But could they walk in and have a happy reunion? Are you kidding? This is General Hospital. Instead, they find crazy Luke Spencer (Anthony Geary) waving a gun and threatening their lives.

Luke’s antics will leave Carly Corinthos (Laura Wright) and Lucas Jones (Ryan Carnes) worried for their mom Bobbie’s safety. And will leave the Spencers to make some difficult choices about how to deal with Luke and the secrets from the shady childhood of Luke, Bobbie and Pat.

Also, Anna Devane (Finola Hughes) and Jordan Ashford (Vinessa Antoine) will have to come clean to Commissioner Sloane (Grayson McCouch) about Jordan’s undercover activities. The question is, will Sloane step up and help out, perhaps even pulling Jake Doe (Billy Miller) in to coordinate with Jordan undercover or will he be the typical jerk that we’ve come to love/hate and try and make things hard on the lady cops. Whatever, he does, my fingers are crossed he does it dripping wet in a towel (sigh).

Meanwhile, Duke Lavery (Ian Buchanan) is plotting to take down Jordan behind both Shawn Butler’s (Sean Blakemore) and Sonny Corinthos’ (Maurice Benard) back. Duke somehow knew that Jordan was wearing a wire and cleverly shut down the “let’s kill Julian” talk but didn’t tell Sonny about the wire. Instead, Duke will try and take down Jordan on his own. But once he’s stalking Jordan and finds out she’s working for Anna, Duke will know his hands are tied else he face Anna hating him for good.

Franco (Roger Howarth) and Nina Clay (Michelle Stafford) will blackmail Olivia Falconeri (Lisa LoCicero) to give them a comped suite and room service or else face Franco tattling about her real baby daddy Julian Jerome (William deVry). Olivia tries to push back and will say no one will believe them, but of course she’ll cave and let them crash at the Metro Court. Naturally, this will backfire because the two of them getting free stuff from the posh hotel will spark even more questions and the truth will inevitably come out about Julian being the DNA donor of the newest Falconeri.

And on the Jake front, things are moving. Hayden Barnes (Rebecca Budig) has marching orders from Ric Lansing (Rick Hearst) to get Jake out of town ASAP so Ric can rush over and comfort Liz Webber (Rebecca Herbst) over the loss of her hunky amnesiac. But alas, this will not work. Hayden faces two large obstacles to getting her faux hubby out of town.

First is that Jake owes a debt of service to Sloane that he will not forego and second, and even more daunting, is that Carly will put her foot down and tell Jake not to leave town with a woman she clearly believes is fibbing about their matrimony. For now, Ric will feel good that his plan is moving forward. He should enjoy the calm before the storm as it all comes crashing down around him.

Also, Cameron Spencer (Michael Leone) will turn to Ric to work up a legal defense for the arson charges poor Cameron thinks he’ll soon be facing. To be fair, if Spencer Cassadine (Nicolas Bechtel) gets his way, Cameron would be sent up the river to a kiddy Pentonville, so consulting a lawyer may be a wise strategy for Cameron.

And finally, there’s a HUGE “General Hospital” rumor that Ava Jerome’s (Maura West) could be saved by a mystery donor. Silas Clay (Michael Easton) already tested all of Danny Morgan’s donors against Ava’s DNA, so it’s not any of the obvious characters. Spoilers indicate this is someone who would not ever think of saving Ava which leads me to think it may be Sonny or Carly.

However, either of these two would likely pony up some bone marrow on the condition that Ava helps them get custody of baby Avery (now baby AJ) away from Michael Quartermaine (Chad Duell). Since Maura West’s contract isn’t due to expire just yet, that means Ava is also not meant to expire just yet. So hopefully they’ll find this donor pretty soon since Ava is looking a little haggard and unhealthy.