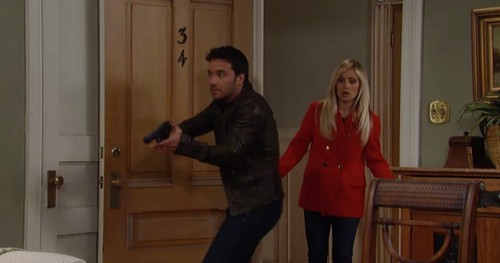 Friday will be busy in Port Charles – lots of action and some shocking cliffhangers. Here are some “General Hospital” spoilers for the Friday, March 27 episode. Today, Tracy Quartermaine (Jane Eliot) will tell Bobbie Spencer (Jaclyn Zeman) that she and Lulu Falconeri (Emme Rylan) found her big sister Patricia Spencer (Dee Wallace) and her daughter Valerie Spencer (Brytni Sarpy). Then Tracy will break the news that Patricia is dead and Bobbie will be devastated. But then Lulu and Dante Falconeri (Dominic Zamprogna) decide that Luke Spencer (Anthony Geary) was hiding in Valerie’s apartment after Dante says Luke sent out a decoy for them to chase and Lulu says she heard noises in Valerie’s apartment.

They’ll rush over there and see signs of the struggle and will know not all is as Valerie told them. Valerie will have to admit to Lulu that she lied about Patricia being dead so that Dante and Lulu can protect Patricia from her evil brother. This will send Dante and Lulu snooping at the old Spencer place where they will find a crawl space with some shocking evidence of past trauma for the Spencer kids.

Also, Commish Sloane (Grayson McCouch) will tell Anna Devane (Finola Hughes) he wants to talk about her CI. He will try again to get more information on who her CI is and what the CI is investigating. Anna will, in turn, want to know more about the CI he mentioned. Neither will reveal much as it essentially is a pissing match between the two cops. Can anyone say smoking hot chemistry? Yowza!

And on the mob war front, Jordan Ashford (Vinessa Antoine) will go back to Duke Lavery (Ian Buchanan) to confirm that he wants her to kill Julian Jerome (William deVry). If she’s got the wire on, as planned, will she be caught with it? “General Hospital” gossip indicates Jordan still has some wiggle room and her CI status is safe, for now. Shawn Butler (Sean Blakemore) will go to Sonny Corinthos (Maurice Benard) and tell him he was wrong about Jordan and doesn’t think she’s an informant.

This will make Sonny suspicious rather than changing his mind. He’ll wonder if Shawn is risking the organization to protect Jordan because he knows she’s a CI. Sonny will inform Duke and the two will begin stalking Jordan to confirm their suspicions. Shawn will not be pleased that they don’t back off and instead, step up watching her. Shawn, in turn, will stalk them as they stalk Jordan to see what they find out and protect her if things go bad.

On the Julian front, he comes to tell Olivia Falconeri (Lisa LoCicero) that he has something important to say about her pregnancy. Will Julian give her a chance to come clean by saying he understands why she would lie and that he won’t hold it against her as long as she tells the truth now? And will Olivia crack? She’s already waffling. Sam Morgan (Kelly Monaco) will tell her dad Julian about Patrick Drake (Jason Thompson) asking her to move in. Julian will offer advice that will tip her into accepting the offer.

Now that Franco (Roger Howarth) and Nina Clay (Michelle Stafford) are free, that’s all good, but neither has a job or a home. So what can they do? Blackmail, of course! Remember, Olivia visited Franco in Shadybrook when she thought he was whacked out on LSD and told him that Julian is her baby daddy. Franco will check with Nina and make sure she’s cool with his plan – of course she will be.

Nina will follow Franco to the ends of the earth so the trip to the Metro Court and some friendly extortion are no big deal to her. Are these two a match made in lunatic heaven, or what? Franco will go to Olivia and tell her she needs to provide a nice cushy room at the Metro Court indefinitely and free of charge or he’ll give Julian a call and congratulate him on impending fatherhood. Olivia will cave immediately.