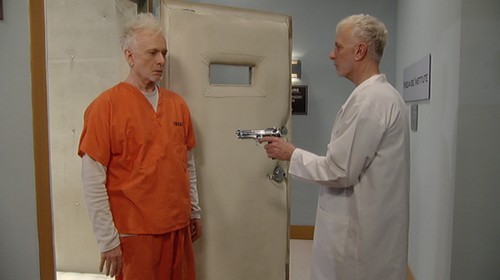 Today’s episode of GH is going to be busy – LOTS going on in Port Charles! Check out these “General Hospital” spoilers for the Thursday, March 26th show. On the Fluke front, Luke Spencer (Anthony Geary) is holed up in Valerie Spencer’s (Brytni Sarpy) apartment and says he’s not going anywhere until he gets the truth about his sister Patricia Spencer (Dee Wallace). Of course we’ll find out Valerie lied to Lulu Spencer (Emme Rylan) and Tracy Quartermaine (Jane Eliot) and Valerie is just protecting her mom from what she knows is the deadly side of her family.

Pat knows Luke killed their mom and tried to kill their dad and likely saw news of Luke’s homicidal antics on the news. Pat knows he’s had a psychotic break and won’t want anything to do with any of the Port Charles Spencers. Meanwhile, with the Elm Street house (the old Spencer family home that Bobbie, Luke and Pat grew up in) slated for knock down to make room for the AJ Quartermaine Memorial Clinic, Dante Falconeri (Dominic Zamprogna) will take wife Lulu to take one last look around for any clues. And they will find some!

“General Hospital” spoilers indicate there is a hidden crawl space the two will come upon with some interesting evidence about Luke’s back story. GH gossip has revealed that the major aspects of the Fluke / Luke DID storyline will wrap up on April 1 on General Hospital’s 52nd Anniversary show. But MAJOR rumors are swirling that the anniversary will coincide with Anthony Geary’s retirement announcement.

And he’ll go out on a high note – after more than 30 years on GH, he’s won seven Best Actor in a soap Emmys and is considered a shoo in for a record breaking eight on the April 26th awards show this year. Plus, Geary has been sidelined with health issues including terrible back pain, so the poor guy may just need a break. That’s why GH has given so much play to the Fluke story – so Luke could go out with a bang (maybe even literally)!

Meanwhile, over at the courthouse, both Franco (Roger Howarth) and Nina Clay (Michelle Stafford) are in for some shocks. Alexis Davis (Nancy Lee Grahn) will flat out tell the judge that Nina was faking her most recent breakdown but will have a good explanation for this and her legal maneuvering will work and Nina will walk free. Franco’s court shock is rumored to come in the form of his newly found daddy (and Port Charles DA) Scott Baldwin (Kin Shriner).

Nina warned Franco that when he told Scott that he was faking crazy, he was putting himself at great risk. He didn’t believe her but then when Scott comes in and says his son admitted some things to him. Franco will be sure his dad is playing him for a fool and will get him sent back to Pentonville, but no. “General Hospital” gossip indicates that instead, Scott will blame Franco’s crimes on someone else – the post-wedding kidnapping and then the baby kidnapping.

After Luke’s recent attack on Scotty, it’s very likely that he will try to shift blame to Luke and get the charges against Franco dropped. That will set both Franco and Nina free to make trouble for all those in Port Charles they’re harboring grudges against (and that list ain’t a short one).

And speaking of criminals – Ric Lansing’s (Rick Hearst) plans to send Jake Doe (Billy Miller) away with a fake wife that Ric himself met on Tinder (Hayden Barnes played by Rebecca Budig). He just gave Hayden a whole stack of photos to show Jake as proof they’re a couple uncoupled by tragic accident. But then the dude he hired to be pre-facial surgery Jake shows up at Kelly’s to try and blackmail Ric. If this guy tells anyone OR if Jake (or Carly or Liz) or anyone that has seen the faked Jake photos sees that guy’s face, Ric is screwed. That means Ric will have to pay off or threaten the guy to get him gone out of Port Charles ASAP!

Carly Corinthos (Laura Wright) will go to bat for Jake in a big way on two fronts. First, she will try and shut down Hayden and her outrageous claims of spouse-hood with the hunky amnesiac. Second, she will try and talk Sonny Corinthos (Maurice Benard) down from seeing Jake as an enemy. With Jake set to go to work for Julian Jerome (William deVry) and crashing at Carly’s place, this will be an uphill battle for Sonny to keep him from implicating himself with Jake who’s secretly working for Sloane (Grayson McCouch). Speaking of Sloane, can we PLEASE get a second helping of him wet from the shower in a towel? I would eat the silver fox with a biscuit. Yum!

Also, Ned Ashton (Wally Kurth) and Michael Quartermaine (Chad Duell) will finally get a clue that someone is making a move on ELQ when they discuss that Luke got his hands on Skye Quartermaine’s ELQ shares. As handing them over to Luke was tantamount to gift wrapping them for the Cassadines, ELQ may be in trouble yet again. But that’s okay.

Maybe Prince Nikolas Cassadine (Tyler Christopher) should be at the reins of the Q family business since Michael will appear to have a drinking and/or drug problem. Of course, that’s the work of Morgan Corinthos (Bryan Craig) and a pill switcheroo, but no one – not even Michael – will know this. Michael could end up in Shadybrook himself for a rehab hold and that would make it easier for the Corinthos clan to swoop in and get custody of Baby AJ (aka Avery) back.

Last, there will be some movement on the Port Charles mob war storyline with Anna Devane (Finola Hughes) feeling guilty about going after Duke Lavery (Ian Buchanan) but having to do it anyway to save Jordan Ashford (Vinessa Antoine) who is now the subject of intense scrutiny from both Sonny and Duke to the extent that Shawn Butler (Sean Blakemore) will be worried about Jordan’s safety. He may have wanted her outed as a mole, but I don’t think he wants her dead in the street.