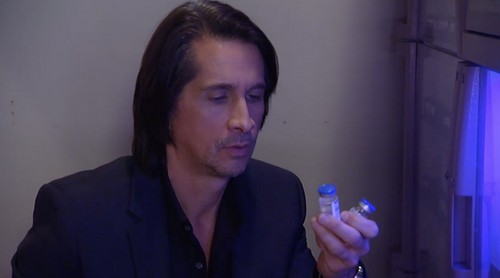 Lots of stuff happening on GH today in Port Charles! Check out these “General Hospital” spoilers for today’s episode – Thursday, April 16. First, on the baby Avery front, Michael Quartermaine (Chad Duell) will be lurking while Kiki Jerome (Hayley Erin) confesses to her Uncle Julian Jerome (William deVry) that she and Morgan Corinthos (Bryan Craig) are responsible for Michael’s meltdown and accidental stroller dumping of her baby sister. Unfortunately for Kiki, Michael took another dose of the meds and chased them with Scotch before he runs into her, so he’ll be off the rails again and it doesn’t look like it will be a pleasant conversation. Michael will threaten to turn Kiki and Morgan over to the cops for what they’ve done.

Also related to the kidnapping, Dr Liesl Obrecht (Kathleen Gati) will come and confront Nina Clay (Michelle Stafford) and tell her she’s sure that she stole baby Avery. Nina won’t take this lying down and will confront Aunt Liesl about her shenanigans, which are many. The bottom line is, both Nina and Dr O are keeping secrets that neither wants to get out. They will call this one a draw.

In his quest to find Avery, Det. Nathan West (Ryan Paevey) will take his mom’s advice and follow Silas Clay (Michael Easton) to NYC to ask him about the kidnapping since Silas was the one who last saw baby Avery before she disappeared. Unfortunately, Silas is with Ava Jerome (Maura West) when Nathan shows up asking questions. This is how Ava will learn her daughter is missing and may galvanize her to fight her cancer instead of continuing on her death quest. Silas should be able to head Nathan off and convince him to go back to Port Charles.

Also today, Commissioner Sloane (Grayson McCouch) will come to Anna Devane (Finola Hughes) to offer her some vital info on the mob war brewing in Port Charles and will ask for her help. Will Anna be open to this? She and Sloane have had such an antagonistic relationship, Anna will struggle with the idea of working with him, but it will be best for all involved if they combine the information from both their CIs to figure out what’s really going on in the back alleys of Port Charles.

Franco (Roger Howarth) showed up at the Quartermaines and runs into Olivia Falconeri (Lisa LoCicero) with Ned Ashton (Wally Kurth). Olivia wants to know why Franco is at the Quartermaine’s asking about ELQ business – Ned will need to tell her that he’s agreed to hand over stock to Franco to get him away from Olivia. This is highly ironic since Ned just chewed out Michael about letting ELQ stock slip through his fingers yet Ned is actively giving his away. Ned will realize he really cares about Olivia and will confess his feelings – problem is, Olivia isn’t feeling the same warm and fuzzy way.

Lucy Coe (Lynn Herring) will rant to Duke Lavery (Ian Buchanan) today that she’s overwhelmed with the Nurses Ball preparations and they’ll swap some reassurances, but Lucy has no idea she’s about to lose yet another man when Duke goes belly up at the 2015 Nurses Ball after the love of his life Anna puts a bullet in him. On a happier note, Lucy loves event planning, so she could set up a spectacular Scottish funeral for the Highlands bad boy.

And we’ll finally get some more traction on the Hayden Barnes (Rebecca Budig) story. Hayden has an interesting back story that is driving her need for money which explains why she was willing to con Jake Doe (Billy Miller) for pay for Ric Lansing (Rick Hearst). The good news is, by getting cozy with Nikolas Cassadine (Tyler Christopher) she may finally get the money she needs. Today, Hayden will reveal some of her motivations to a confidante.

Finally, Sam Morgan (Kelly Monaco) is ready to make the big move to Patrick Drake’s (Jason Thompson) house and her new BFF Jake will help. Patrick, as usual, won’t be happy that the two are sharing face time but, more importantly, as Jake is moving her stuff into Casa Drake, he’ll see a photo of Robin Scorpio (Kelly McCullough) and feel a tug on his amnesiac memory strings and will start asking questions about the ex-Mrs Drake.