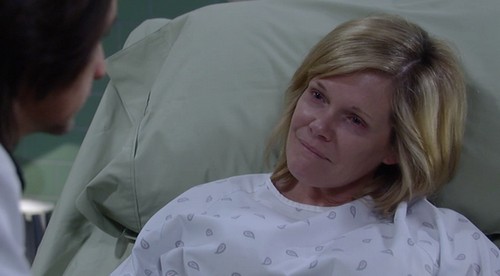 “General Hospital” spoilers began teasing Maura West was leaving the ABC soap after the actress sent out a tweet to her fans – but the message was taken completely out of context. On March 3, West tweeted, “Most excellent GH fans: Thanks for watching with me, hanging out and playing. Let’s do it again some day! Much love, Maura.” As soon as Maura’s message hit the internet, GH fans began assuming it was a goodbye message and the actress was exiting GH – then the rumor mill began churning and the news of her departure spun out of control.

It was all a big misunderstanding. “General Hospital” spoilers tease that Maura West is NOT leaving the ABC soap, and despite her string of bad luck and medical woes, Ava Jerome is not going anywhere and will continue to be an integral part of the soap opera. When Maura sent out that tweet, she was participating in a live chat with fans on Twitter, and she was thanking them for participating with her. She wasn’t announcing any departure whatsoever, just saying goodbye to fans that participated in the live chat before she logged off from Twitter.

So “General Hospital” fans, are you as happy as we are that Maura West is sticking around? Do you think that her character Ava Jerome will overcome the latest obstacle that was thrown at her – cancer? Can you imagine GH without the mobstress? Let us know what you think in the comments below and don’t forget to check CDL tomorrow for more “General Hospital” spoilers and news.