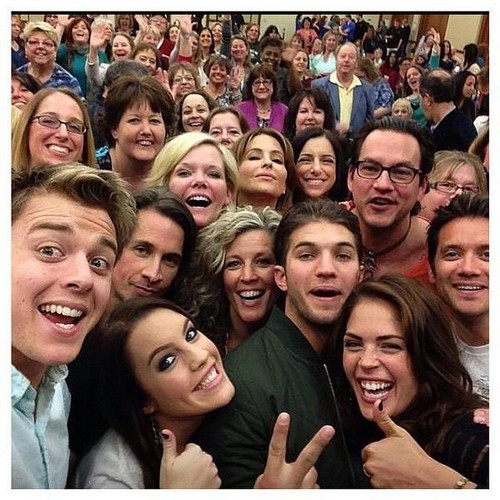 The “General Hospital” spoilers for the 2015 Nurses Ball is nearly here and have we got spoilers for you! The Nurses Ball will span three days of the program from Friday, May 1 through Tuesday May 5. First, based on the #FanFeb poll, we’ll see the revival of one character we haven’t see in awhile. It will be Stefan Cassadine, Serena Baldwin, Mike Corinthos or Courtney Matthews. Personally, I’m rooting for Stefan – it’s always fun to have more Cassadines around. The real question is will it be a legitimate appearance, a flashback, dream sequence or ghostly manifestation?

In addition to the fan choice return, there were rumors that Brenda Barrett (Vanessa Marcil) would be returning based on some social media chatter between her and Kelly McCullough who plays Robin Scorpio. Turns out that’s not happening. Call us #disappointed. But here’s an even crazier “General Hospital” rumor…

There’s word floating around that Robin will show up for the Nurse’s Ball since her first love Stone Cates (Michael Sutton) is being honoured at this year’s event. But that’s not the outrageous part. Get this – the crazy rumor is that Robin will turn back up in Port Charles pregnant – and not just pregnant, but pregnant with the last remaining embryo that belongs to Lulu Falconeri (Emme Rylan) – compounding the problem is that Helena likely had the ovum fertilized with Stavros’ sperm and not her hubby Dante Falconeri’s (Dominic Zamprogna). Imagine poor Robin returning pregnant with a Cassadine baby!

Remember that Helena Cassadine (Constance Towers) had the last embryo and the talk is that she decided to implant it in Robin for safekeeping. If Robin shows up, she’ll know exactly who Jake Doe (Billy Miller) is and can blow the whole mystery of the sexy amnesiac wide open. So that’s the big rumor that we can hope may come to pass, but now we’ll share some solid spoilers on what to expect at the Nurses Ball.

First, we know that Duke Lavery (Ian Buchanan) is a goner. He’s either been released from his GH contract or has retired, depending on what source you believe, but either way he’s going, going, gone and will depart in a blaze of glory. Duke will take a bullet from his lady love Anna Devane (Finola Hughes) that will end his life. But here’s the question? Does Anna kill him with intent or happenstance?

We also know that Jordan Ashford (Vinessa Antoine) and Dante will be injured in a mob shoot out, one of two bloody events that will break out at the Nurses Ball. So you have to wonder if Duke was making a move on Jordan since he’s realized she’s Anna’s CI and Anna had to choose between Duke and Ashford. Alternately, it could be a straight up Jerome vs Corinthos showdown and Anna could be with the cops – including Dante and Jordan and Duke just happens to get shot by her.

The mob fracas is supposed to happen in a parking deck while an assassination attempt takes places out front of the Metro Court on the red carpet. The assassination is a hit against Carly Corinthos (Laura Wright) and Sonny Corinthos (Maurice Benard) and good old Jake Doe (Billy Miller) will be there to save their butts like he’s done so many times before.

Olivia Falconeri (Lisa LoCicero) and Brad Cooper (Parry Shen) will also be injured in the bloody melee but it’s not clear if they will be part of the assassination or mob confrontation. Julian Jerome (William deVry) and Lulu are also supposed to be present at the shooting but will emerge unscathed. The big question is whether Olivia will lose her baby – there are indications that her injuries will put the baby at risk, but she will not lose the child.

What Olivia will lose is newly found love Ned Ashton (Wally Kurth) who will have a swan song as Eddie Maine onstage at the event but who will then leave Port Charles. We know Kurth is headed back to Days of Our Lives and is done as Ned for now but there are some lingering questions about his departure. Will Ned leave town in shame once the family finds out that he gave his ELQ shares to Franco (Roger Howarth) when he knows they’re facing a takeover.

Or – and this is more exciting – will Olivia’s fear over the prospect of losing her baby lead her to confess to Julian that the baby is his? And will that cause a rift between Olivia and Ned that will have him scurrying out of Port Charles in anguish? And when Olivia does come clean, will Julian’s relationship with Alexis Davis (Nancy Lee Grahn) end up on the rocks? I’m a little bored with them, so I’m totally down with and Olivia + Julian pairing – we could call them Olian or Juvia…

And, Carly will survive her assassination attempt and feel hale and hearty enough to get into a major catfight with Hayden Barnes (Rebecca Budig) after Carly recognizes Pete, the “before” Jake from the wedding photos working at the Nurses Ball. Carly knows for sure that Hayden is lying and everything is about to fall apart for Ric Lansing (Rick Hearst) at long last. The Nurses Ball is going to be three days of nonstop action and it looks like most of it will be offstage, despite all of Lucy Coe’s (Lynn Herring) precise planning. And it also looks like Duke may miss their tango after all. Either that, or it will be his last tango in Port Charles – or anywhere else!

Be sure to check back with CDL often for more “General Hospital” spoilers on the Nurses Ball and other happenings!