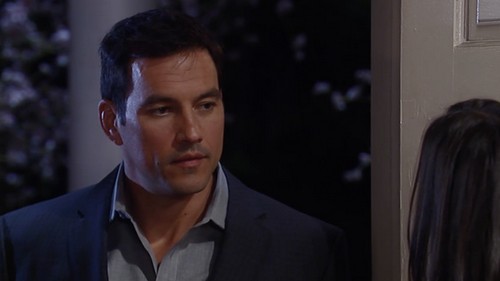 Here are some “General Hospital” spoilers for the Tuesday April 21 episode – you don’t want to miss today’s show – the Jake Doe (Billy Miller) story line is cracking up on three different fronts! First, on a personal level, Jake himself is getting some clues about his past. He keeps having those flashbacks and one was triggered by the Alan Quartermaine ring. Jake saw a flashback of him sliding a ring onto a woman’s hand and his hand with a ring. Will Jack assume it was Hayden Barne’s (Rebecca Budig) or will he go deeper and see discrepancies between his flashback and the fake wedding photo.

Nikolas Cassadine (Tyler Christopher) is at Patrick Drake’s (Jason Thompson) house and will have to scramble to explain to Sam Morgan (Kelly Monaco) how Spencer Cassadine (Nicolas Bechtel) had Jason’s ring. Likely Nikolas will use the standard fallback of blaming his evil granny Helena Cassadine (Constance Towers) to cover his butt. Sam shouldn’t have any struggle believing Helena is a monster.

However, all of Sam’s suspicions will not be laid to rest by Nikolas’ explanation. Prince Nik is also horrified to see Jake there and worries that somehow this will all come crashing down on his head immediately. The good news is, Sam thinks so highly of Nikolas that she won’t suspect him. Port Charles is going to be in a crap storm when everyone realizes Nik has played them for a fool.

On the flip side, I absolutely love that Nikolas is finally getting to his true Cassadine roots and is turning dark. He’s screwing Jake and all his loved ones over and is preparing to pounce on ELQ. Actor Tyler Christopher is also excited about the change. He said, “I’ve been hoping for this for a while. Nikolas has been pretty much the same way for almost 20 years – altruistic and righteous. And it’s going to be interesting, at least for me as an actor, to take a different approach to the character. I think it’s that he’s finally had enough of being so nice and true to people and getting burned, so he’s putting his guard up and he’s going to keep it up. And anyone who doesn’t want to fall in line with him is going to get crossed – in, for lack of a better phrase, true Cassadine form.”

After a close call at the Drake house, Nikolas will be ready to blow off some steam. Looks like he may go find Hayden and finish what they started on his desk before Alexis Davis (Nancy Lee Grahn) interrupted them. Look for Nikolas to grow much closer to Hayden in coming weeks since she’s the only person in Port Charles that knows he’s up to no good and doesn’t care. Hayden still wants him and that’s good enough for him – she’ll become Nikolas’ willing partner in crime in coming months.

Lulu Falconeri (Emme Rylan) walks in on Dante Falconeri (Dominic Zamprogna) comforting Valerie Spencer (Brytni Sarpi) and doesn’t like what she sees. Lulu will be catty when Dante is expecting her to have compassion for her cousin’s recent loss of her mother and her life being wrecked. But Lulu won’t be a good girl and that will bond Dante even more with Lulu. Uh-oh. Could be trouble in Falconeri paradise.

Carly Corinthos (Laura Wright) wants to know if Ric Lansing (Rick Hearst) and Hayden know each other and when the three of them have a run in, it’s the perfect chance. Of course, they’ll deny knowing each other besides maybe catching a glance of each other in the halls or Hayden knowing Ric was her “husband’s” lawyer. Carly is not buying it. The Jake story is also crashing in on Ric as well as Nik. Ric and Nik will be Port Charles’ least liked citizens once their part in Jason’s story line is revealed.

Lucy Coe (Lynn Herring) is scurrying around Port Charles making last minute arrangements for the Nurses Ball. Damien Spinelli (Bradford Anderson) tells Maxie Jones (Kirsten Storms) he may join the cast of Magic Milo (the sexy Chippendale’s type act for the Nurses Ball). Considering it’s a beefcake number and Damien is more like cheesecake, will Maxie crush him by telling him he doesn’t have the right stuff to undress on stage?

Lucy will also run into Nathan West (Ryan Paevey) and Ellie Trout (Emily Wilson) and will encourage them to attend the Nurses Ball together. Nathan and Ellie will give it some serious thought because they think it might light a fire under Damien and Maxie to realize what they missed. Weren’t the kids in Port Charles just trying this exact plot a few months ago? Hmm….

Finally, Kiki Jerome (Hayley Erin) is feeling bad about working with Morgan Corinthos (Bryan Craig) to set up Michael Quartermaine (Chad Duell). But before she can come clean about it to anyone other than her dad, Sabrina Santiago (Teresa Castillo) will figure out Michael was drugged. But how long will it take her to figure out that it was Kiki who did it?

And what will the fallout be for the custody case if it comes out she drugged Michael? Surely a judge wouldn’t take the baby from the victim (Michael) and hand her to the perpetrator (Kiki). Also this week, Kiki and Morgan will head to Silas Clay’s (Michael Easton) and find a surprise person there. Is it baby Avery? Is Silas the one that snatched her to try and help Ava Jerome (Maura West) beat her cancer? Can’t wait to find out!