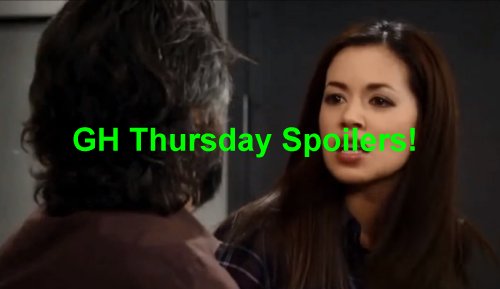 Anna is also ready to fire her therapist Dr Andre Maddox (Anthony Montgomery). Anna doesn’t think she needs a shrink since she’s not hallucinating – Carlos is real. Anna and Andre have a chat on the docks and he pushes her to take strong action.

Anna will later turn to Mac Scorpio (John J York) for support in this matter. Also, looks like Andre may have a past with a pal of Anna’s – PCPD chief Jordan Ashford (Vinessa Antoine).

How well do these two know each other and will they rekindle only to have Shawn Butler (Sean Blakemore) return from Pentonville? Hayden Barnes (Rebecca Budig) may clear Shawn’s name soon. Will he be back after that happens?

Over at the PCDP, Valerie Spencer (Brytni Sarpi) catches Dante Falconeri (Dominic Zamprogna) by surprise when she asks him out on a date. Is Dante all-in on this rebound romance now that Lulu Spencer (Emme Rylan) blew up at him?

Lulu catches up with Maxie Jones (Kirsten Storms) over at Kelly’s and Maxie thinks Lulu should fight back and take Dante from Val. But Lulu may be more interested in talking to Dillon Quartermaine (Robert Palmer Watkins) when she hears he’s leaving Port Charles.

Tracy wants to be in charge of the Nutcracker themed Toys for Tots event. Too bad that Monica Quartermaine (Lesley Charleson) also wants to run it. Will Monica enlist her newfound son Jason Morgan (Billy Miller) to be on her side in the battle for the ball?

Also Liz Webber (Rebecca Herbst) will be scared soon. Nikolas Cassadine (Tyler Christopher) left an ominous voice mail that will chill Liz. Ava Jerome (Maura West) will also be feeling the cold when Paul threatens her after she pushes him to reveal his secrets.

Paul wants to keep the lines clear between them. Ava tries to seduce the information out of him, but Paul is too clever for that. Paul has to juggle Ava and Tracy – and now Carlos. Paul owes Carlos a showdown about who’s boss in Port Charles.

Sabrina needs help from Felix DuBois (Marc Samuel) but to what extent will he go in order to help Sabrina falsify her baby daddy data to keep both Carlos and Michael in the dark?

All this and more on the Thursday, December 3rd GH episode. Don’t miss a moment and then check back with CDL for tons more “General Hospital” spoilers and gossip!