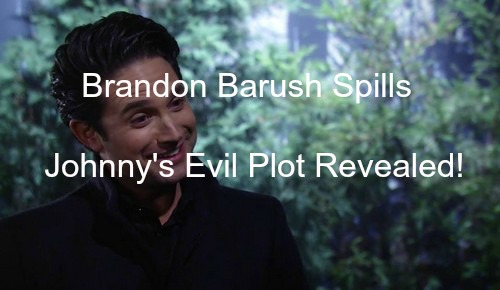 “General Hospital” (GH) spoilers reveal that Johnny Zacchara (Brandon Barash) did not end up back in Lulu Spencer’s (Emme Rylan) life by happy accident. It seemed like perfect timing that Johnny showed up just as Lulu need help running a revenge scam.

But it looks like Johnny Z may have been keeping an eye on Lulu for quite some time and, after her marriage to Dante Falconeri (Dominic Zamprogna) fell apart, he was right where Lulu needed him to be. Pretty convenient, huh?

The Dante-Lulu split made a huge ripple in Port Charles since Dante’s affair was outed at The Haunted Star Halloween party. Word would have gotten back to Johnny very quickly from the mob contacts he’s had doing low-level spying on Lulu.

Brandon Barash as much as confirmed this in a recent interview with On-Air On-Soaps. Barash said, “It makes more sense to me that Johnny always has people in Port Charles reporting to him… He finds out this information about Lulu and Dante and makes his entrance based on that information.”

Despite the explanations that Johnny offered Lulu about why he came back to Port Charles – that being on the run was no fun and that his money had run out – neither of those things drove him back to Port Charles. He heard Lulu was available and – bam – there he was.

Plus claiming to be broke allows Johnny to stay on The Haunted Star and be in constant proximity to Lulu. But Lulu can’t see that Johnny is hyper-focused on her. Lulu is so intent on revenge against Valerie Spencer (Brytni Sarpi) that she’s not entertaining thoughts of romance with Johnny.

While Johnny seems ready to make Valerie pay for hurting Lulu, we have to bear in mind that Johnny has a different agenda than Lulu. She wants Valerie punished for fooling around with Dante – but Lulu also wants Val out of Dante’s life.

The problem is, that would leave space for Lulu to reconcile with Dante – and Johnny does not want that. Lulu and Johnny’s agendas diverge when it comes to the outcome for Dante. Johnny doesn’t want Dante coming back to Lulu asking for another chance.

So Johnny’s revenge plan has to punish Valerie as Lulu has demanded, but not get her out of Dante’s life. For Johnny, Dante being with Valerie is the perfect outcome since that leaves Lulu available for him and ready to rebound.

But it’s more than sex for Johnny. He has genuine affection for Lulu and has been waiting for an opportunity to give love with Lulu a try. Johnny just needs time for Lulu to open up to him – so he’s playing the friend for now and helping her out.

Plus, by offering to whack Valerie straight out of the gate, Johnny made it seem like he’s willing to do anything to make Val pay. In making the offer, though, he knew Lulu wouldn’t want him to kill someone at her behest, no matter how angry she was but it made him seem committed to the revenge scheme.

Now Johnny is free to mess up Valerie’s life, but in a way that works out for him. You’ll recall when Lulu asked Johnny’s plan, he told her it was better if she didn’t know. That’s because what she doesn’t know can’t come back to hurt his chances of getting with Lulu.

So what do you think, GH fans, should Lulu give Johnny a chance at love? You have to admit he’d at least be a fun rebound guy… And will Dante be over Lulu for good if he finds out she’s been scheming with Johnny against Valerie?

Share your thoughts in the comments below and check back with CDL often for more “General Hospital” spoilers and news.