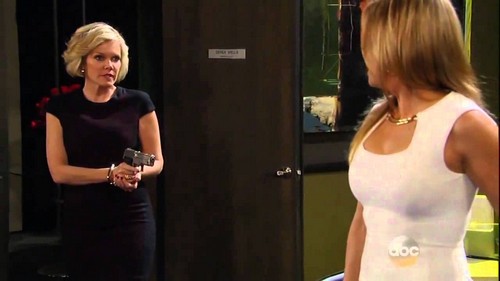 “General Hospital” spoilers indicate that Ava Jerome (Maura West) is like a cat with more lives than anyone can reasonably expect. Even though Ava is behind bars now and it seems like she has nothing left but a grim future in Pentonville, don’t count the murderous Jerome mob moll out yet. There is much more to come from this oh-so-compelling character in weeks to come.

Ava in jail house blues is a far cry from the brash style of gum-smacking Denise DeMuccio. And the lack of artifice is what really allows Maura West to shine right now and really show off her Emmy winning acting skills. Her jail house scenes have been amazing. But how can Ava get out of the mess she’s in and can she get any lower before she hits bottom and rebounds?

Let’s review. Ava has lost her true love Morgan Corinthos (Bryan Craig), her daughter Kiki Jerome (Hayley Erin), her daughter Avery Corinthos, and her shot to live outside of a jail cell. Does Ava have anything left? Well, she’s got two powerful weapons in her arsenal – one legal and one much less so. And between these two resources, we’ll see Ava walk out of jail soon. 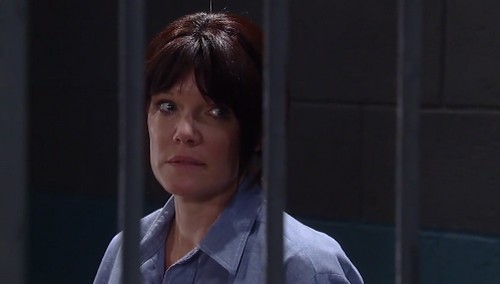 Resource number one is the legendary legal mind of Diane Miller (Carolyn Hennessy). Julian Jerome (William deVry) mentioned that he had landed the top lawyer to represent his sister since Alexis Davis (Nancy Lee Grahn) can’t rep her since she’s repping Julian in his latest criminal case. If anyone can get Ava out of jail and charges dropped, it’s Diane.

Remember how Diane got Franco (Roger Howarth) off Scot-free when she dangled a tumor in a jar in front of the judge? If anyone can get Ava her release papers, it’s Diane. Plus Diane will be joined by Ava’s second resource – her brother Julian. “General Hospital” rumor has it that while Julian hasn’t been able to snag the flash drive with the evidence, he may have another solution in the works.

Remember how Ava told Nina Clay (Michelle Ashford) that deleting the bloody knife photo from her phone didn’t remove it from the cloud? Was that foreshadowing? Even if Julian got his hands on the flash drive, that doesn’t mean the info isn’t on the PCPD servers. So the talk is that Julian is going to do some sort of data dump or server crashing to erase the evidence against his sister – we’ll see…

The thing is, no matter how terrible Ava has been – and we can agree that she’s horrible – she’s a fan favorite. Ava murdered Connie Falconeri, slept with her daughter’s BF, lied about the paternity of her baby, lied about her own DNA to sneak back into town, encouraged Sonny Corinthos (Maurice Benard) to kill AJ Quartermaine, and dozens of other dastardly deeds.

But even with all that, aren’t you quietly rooting for Ava to end up with Morgan? To be reunited with her daughters? To get out of jail? The fact is, as despicable as Ava’s actions are, we’re all intrigued by her. General Hospital is the better for Maura West being part of the cast and they surely can’t let her go now. So don’t count Ava out yet – she’s down, but far from out.

Stay tuned to CDL for more “General Hospital” spoilers and updates on how Ava will rise above all her troubles and rise like a phoenix from the ashes.