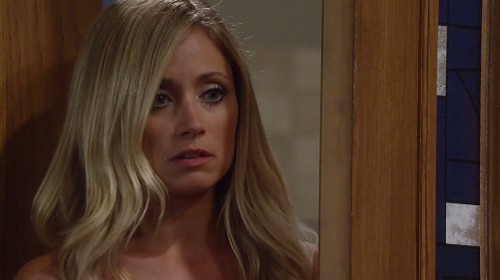 Recent “General Hospital” spoilers indicate that Lulu Spencer (Emme Rylan) and Dante Falconeri (Dominic Zamprogna) are headed for hot water. Lulu’s portrayer Emma Rylan talked to Soaps in Depth and offered some insights into what’s ahead for the Falconeri family and the struggles they’ll be facing soon. We know already that it’s 99% likely that Valerie Spencer (Brytni Sarpi) is pregnant by Dante.

Unless the GH writers have something up their sleeves where Valerie’s medical symptoms turn into ovarian cancer or some other tragedy, we can assume that Val is knocked up and Dante is the baby daddy. But Jean Passanante and Shelly Altman have pledged to take a new approach to plots we’ve seen before, so hopefully the one-night-stand love child story line will go a different way.

For a change, maybe there will be no hiding the baby, passing the baby off as someone else’s child, and no DNA paternity test results rigging. Shouldn’t we be able to trust the labs at General Hospital? It would be refreshing for Valerie to come clean to Dante about the baby right away and the two of them decide what to do about their baby together. First thing will be to tell Lulu the truth.

Emme Rylan told SID that she understands why Dante slept with Valerie, but her character Lulu will not be so tolerant. Rylan said, “When we’re hurt or scared, we lose control and make mistakes… that’s what Dante did. He freaked out and acted irrationally – he lost his mind. What we have here is just a horrible, horrible misunderstanding.” But that’s water under the cheating bridge as of now…

And while it looks like Lulu has forgiven Dante and Valerie for the lip lock, she has not. Lulu is fronting for now and hoping she’ll feel calmer about it in the future. Rylan said, “It’s a facade. If she really faces how hurt she is… she might not be able to forgive his infidelity then she might lose him and she doesn’t want that to happen.”

Dante’s cheating is one issue, but there’s also Dillon Quartermaine (Robert Palmer Watkins) to consider. Rylan admits that once Lulu finds out about Dante and Valerie cheating, “there’s a possibility for Lulu and Dillon.” The groundwork has all been laid out. We’ve seen Lulu deeply moved by Dillon’s screenplay that seems to feature their story as the two leads of the romantic movie.

And once Lulu is crushed by the revelation that not only did Dante cheat, but he’s having a baby with Valerie when she and Dante have struggled so much with infertility. This will lead her straight into Dillon’s arms, but will it be a permanent relationship change? Nah. Rylan says “She [Lulu] would have never left Dante for him [Dillon]” except for these extraordinary circumstances.

But don’t think we’ve seen the end of Lante even with Dillon and Lulu hooking up and Dante having a baby with cousin Valerie. Dante and Lulu love each other too much to not get their happily ever after. Plus, Port Charles needs at least one functional married couple to balance out all the cheating and lying going on with the rest of the cast of characters.

Also of interest in this story is the groundwork that has gone into creating the irrefutable chemistry that we’re seeing between Dillon and Lulu. When ABC was casting for Dillon Q, they had Rylan read romantic scenes with actors being considered for the role so Rylan knew there was something coming to shake up the marriage between Lulu and Dillon.

And the actor chosen, Robert Palmer Watkins, told SID that when he was cast as Dillon, not only did he research the character history, but found an on-set expert to consult with in the form of staff writer Elizabeth Korte. Watkins said he visits Korte’s office frequently asking, “Who is this character? What is their relationship? She was very welcoming.” Watkins says he took advantage of Korte’s expertise on his character to play the part with an eye on the back story to do the part justice.

With Valerie feeling under the weather, we know the pregnancy story will break soon which means the cheating will also be revealed. Expect to see Port Charles’ most stable marrieds to be put through the wringer – any time now. And stay tuned to CDL for more “General Hospital” spoilers about the state of Dante and Lulu’s marriage, the Valerie baby and Dillon’s blossoming feelings for Lulu.