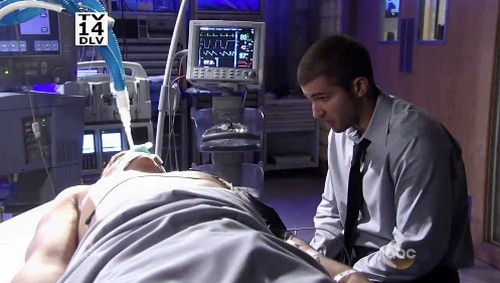 Sonny survives surgery – Check out these “General Hospital” spoilers for the Wednesday, September 16 episode of the ABC soap. Patrick Drake (Jason Thompson) will come out of the surgery on Sonny Corinthos (Maurice Benard) with an update on Sonny’s condition. Sonny survived the surgery but it’s still touch and go and Sonny is not out of the woods yet. This is not the great news the Corinthos clan was hoping for, but at least he’s alive. Look for some negative repercussions though – he may be paralyzed.

This will heighten Lulu’s suspicions that there was more to Valerie and Dante’s kiss than just a lip lock. Nathan wants to try and protect his partner and confronts Valerie at work and tells her to stay away from Dante. This troubles Valerie and she thinks about her true feelings for Dante, especially in light of the baby news she needs to break to Dante (or not) depending on what she decides.

Julian denies involvement. Of course, Julian was the one who opened the door in Port Charles for the new mob faction, but he didn’t know they were going to take out a hit on Sonny and doesn’t feel like he’s responsible. His sister Ava Jerome (Maura West) is also getting grilled about the attempted hit on Sonny, but it’s Scotty Baldwin (Kin Shriner) quizzing her about the shooting.

Thing is Scotty doesn’t care much if someone tried to off Sonny since he hates the Teflon Don and has been trying to take him down – legally – for years. In a surprise move, Scotty then offers to represent Ava in her murder trial. Julian had hired Diane Miller (Carolyn Hennessy), but Ava will agree to let the former DA represent her instead.

Scotty tells Ava something interesting about the evidence against her in the Connie Falconeri case. Ava’s trial is ready to start and there’s an unexpected visitor that could help Ava get off on the charges. Did Scotty take the evidence with him when he left the DA’s office? Or did someone else get hold of it? We know Ava will walk out Scot-free, but what puts these events in motion?

Don’t miss a moment of today’s GH episode then check back with CDL for more “General Hospital” spoilers, gossip and more.