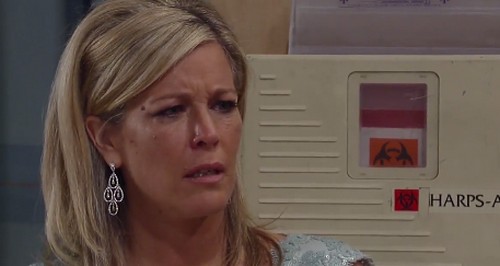 Check out these “General Hospital” spoilers to get you ready for the Tuesday, September 15 episode. Big action on Sonny’s injury today. Sonny Corinthos (Maurice Benard) is flat lining which is bad news for the Corinthos clan. Also bad news is that Morgan Corinthos (Bryan Craig) is making a ruckus while the doctors are trying to save Sonny’s life and he’s upsetting the family even more. Morgan upsets Carly Corinthos (Laura Wright) as he rants about Sonny dying – he’s certain it will happen and she’s praying at all costs that it won’t.

Michael Quartermaine (Chad Duell) tries to dial Morgan back, but the kid is off the rails. He can’t see past his rage. Patrick Drake (Jason Thompson) is able to stabilize Sonny but then tells Carly and the kids it’s time to decide on the life-saving and possibly paralytic surgery for Sonny. Morgan is no help in this decision but Carly and Michael talk it over and decide to try and save his life despite the risk.

They say yes to the surgery. Dante Falconeri (Dominic Zamprogna) is there and takes note that Michael is calling Sonny “dad” once again and wants to know what happened. Michael explains the whole forgiveness thing and how if you love someone enough, you can forgive them anything. That gets some wheels turning in Dante’s brain about his own situation.

Also concerned about Sonny is Maxie Jones (Kirsten Storms) who tells Nathan West (Ryan Paevey) that she hopes Sonny and Carly get their shot at love and happily ever after. Maxie and Nathan bond over the idea of loss and get very affectionate. This life and death interlude has them thinking seriously about their future as a couple and not wasting the precious time they have.

Meanwhile, Liz Webber (Rebecca Herbst) is all “boo hoo” and “I have to tell you something, Jake” but she won’t. As usual, Liz will pull right up to the truth line then back away. Liz will tell him she did something awful to Sam Morgan (Kelly Monaco) but then will make it about a more minor slight, possibly something from the past to do with their mutual love of Jason.

Jake reassures her that he loves her no matter what and Liz takes comfort in that statement, for now, but she knows her time is fast running out. Sam, of course, is clueless about this going on and heads back to her old place and finds someone there she’s not expecting. She asks what the hell they are doing there. Is it Ric Lansing (Rick Hearst) since he was kicked out of the MetroCourt?

Ric and Sam both noticed the similarities in Jake and Jason, particularly as Jake swooped in at risk to his own life to take out the bad guys and save Sonny and TJ. Will the truth dawn on either of them? If Ric does figure it out, look for him to stay quiet since he doesn’t want Jason back in Sonny’s life as they were always rivals for Sonny’s brotherly affections.

All this and more on today’s GH – be sure to come back to CDL for daily “General Hospital” spoilers, news and more!