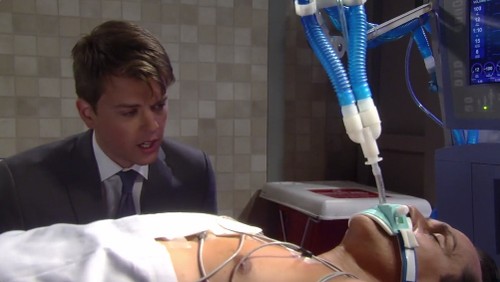 Check out these “General Hospital” spoilers to find out what’s ahead for the week of September 14 through September 18. This week in Port Charles, it’s all about Sonny and Jake. Dante Falconeri (Dominic Zamprogna) heads to GH after his punch out with Julian Jerome (William deVry). Dante is stunned to find out that his dad is in dire straits. Dante always thought Sonny Corinthos (Maurice Benard) was bullet proof but this incident shows that’s not true. Patrick Drake (Jason Thompson) gives Dante an update that his dad may not make it – or could be paralyzed.

Carly Corinthos (Laura Wright) has to decide about the surgery that could paralyze Sonny – or save his life. Carly turns to Michael Quartermaine (Chad Duell) for help but Michael also has to deal with Morgan Corinthos (Bryan Craig) who is off the rails. Morgan is torn between wanting Julian in jail and wanting to just kill him outright.

Morgan tries to get TJ Ashford (Tequan Richmond) to implicate Julian so he can be held for Sonny’s shooting but then also contemplates bypassing the legal process and putting a bullet in Julian who all of the Corinthos clan blames for Sonny’s condition. Kristina Corinthos-Davis (Lexi Ainsworth) will show up this week to check on her ailing dad, but will only be in Port Charles a few days.

Last we saw Liz Webber (Rebecca Herbst), she was crying and told Jake Doe (Billy Miller) she had something to tell him. But we’ve seen this weepy song and dance before and Liz will back off and blather something else and will not tell Jake that he’s Jason. Lies and more lies. Liz is maybe the worst fiancee of all time. Boo! Hiss! Poor Jake…

It’s not lost on either Sam Morgan (Kelly Monaco) or Ric Lansing (Rick Hearst) that Jake’s actions during Sonny’s ordeal are very reminiscent of Jason. This is an interesting notion for both of them since Sam loves Jason while Ric hates Jason and is likely happy that he’s dead. Ric always felt that Jason stole the brother position with Sonny from him. But will either think that Jake could be Jason?

Dante has more stress this week and, in the aftermath of snapping and punching Julian for calling him a cheater like his dad, ponders coming clean to Lulu Spencer (Emme Rylan) about sleeping with Valerie Spencer (Brytni Sarpi). Dante goes to Nathan West (Ryan Paevey) for advice on whether he should tell his wife about the one nighter. Nathan then tells Val to stay away from his partner Dante.

In light of her pregnancy, Valerie ponders her feelings for Dante and doesn’t like the way Nathan treats her. Later, Nathan and Maxie Jones (Kirsten Storms) are happy to have each other and celebrate that their lives are not in upheaval. Maxie is pleased to have a movie role but then Dillon Quartermaine’s (Robert Palmer Watkins) film has a snafu and Paul Hornsby (Richard Burgi) tries to help.

There is a swap in lawyers for Ava Jerome (Maura West). Julian said he got Diane Miller (Carolyn Hennessy) but then it turns out Scotty Baldwin (Kin Shriner) will rep Ava in the Connie Falconeri murder trial. Scotty has some important info about her case – will he make the confessional recording go away to make Ric look like a flop as the DA? Would Scotty let a murderer go free to help his career?

Ava’s trial starts soon and someone unexpected shows up that might help her case. Port Charles has the most expedient court system in the world. Despite his sister being on trial, Julian is feeling the heat for Sonny’s shooting (though he’s not responsible for the crime) and will ask Alexis Davis (Nancy Lee Grahn) to leave town with him for a while. Is Alexis down for an escape until things die down?

Also this week, Emma Drake (Brooklyn Rae Silzer), Anna Devane (Finola Hughes) and Sam pull together a surprise for Patrick – he’s caught off guard and touched – and may be ready to propose to Sam given recent life affirming revelations, Sam’s touching declarations of love and Emma needing a mom and loving Sam.

Also this week, Nina Clay (Michelle Stafford) and Franco (Roger Howarth) are out of jail and looking for revenge. Nina reveals to Ric that she knows he was gaslighting her – thanks to some hints from Franco. The duo plan to exact revenge on Ric. First, he’s going to get dumped by his wife so she can take up with Franco. But that’s the just the start of Ric’s problems.

Don’t miss any of the life or death action this week in Port Charles and come back to CDL for daily “General Hospital” spoilers plus gossip, news and more.