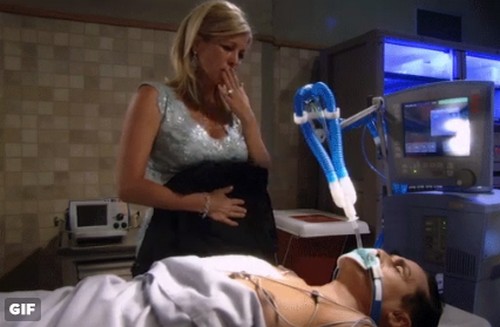 Near-death experiences are nothing new in Port Charles, but “General Hospital” spoilers indicate that the Sonny Corinthos (Maurice Benard) shooting is going to be something different and tied inexorably to Morgan Corinthos (Bryan Craig) and his mental state. As Sonny physically unravels from his wounds, we can expect to see Morgan unravel mentally. These story lines will allow all of the actors that portray Corinthos family members to exercise their acting chops to a greater extent.

There are weeks of medical drama coming for Sonny. Far too often, we see one of two outcomes with soap shootings. On one end of the spectrum, the victim is on their feet far too soon and back to business as usual. On the other end is a victim lying in a coma indefinitely then coming back with amnesia, a wheelchair, or some other dramatic after-effect. But the new writers are looking to shake up the expected, so we can expect a more compelling outcome from Sonny’s shooting.

First, don’t look for Sonny to die on the operating table, languish in a coma, or be up and walking after a week. They are really playing up the bullet near the spine angle so that will become significant. Carly Corinthos (Laura Wright) has to decide whether or not to move forward with life-saving surgery that could result in paralysis. The likely – and interesting – outcome is that Sonny will be paralyzed for a while. This will leave him frustrated with physical limitations and needing help with the syndicate.

Expect Michael Quartermaine (Chad Duell) to embrace his Corinthos roots and be his father’s legs and help run the business. Picture Michael Corleone in The Godfather taking over as his older, weaker father plays with the kids. But don’t imagine Sonny in a wheelchair indefinitely. Instead, expect to see him fighting back to recover his physical agility and be the man that he once was. Carly wants to be at his side, even when Sonny doesn’t want her there because he doesn’t want her to see him as weak.

Also troubling to Michael and Carly will be Morgan’s mental state. Sonny had a heart to heart with Morgan and got him to agree to see Dr Kevin Collins (Jon Lindstrom). But now that Sonny isn’t there as a voice of reason, Morgan will spin out of control, even worse than before. Morgan vowed to kill Julian Jerome (William deVry) since he blames him for the shooting, but will also lash out at his family. Just when Carly needs all the kids to pull together, Morgan will lash out at her horribly.

Morgan will refuse to see Kevin, refuse to be diagnosed for bipolar, and will continue to deteriorate mentally. The only person that can save Sonny is Morgan – but Sonny is in no position to do anything about Morgan since he’s barely clinging to life. This puts Michael into a tough spot. Michael needs to take control of Sonny’s crew, comfort Carly as she’s frets over Sonny, and consider what to do about Julian. Will Michael also be able to rein in his baby brother?

Don’t expect any resolution on Sonny’s medical status for a couple of weeks – and that’s just on the life or death struggle and the surgery. Sonny has a long road ahead of him towards recovery – likely physical therapy, a wheelchair, crutches, and a slow recovery back to the mobster he once was. Good thing Sonny has Michael to take care of the family… Be sure to check back with CDL often for more “General Hospital” spoilers.