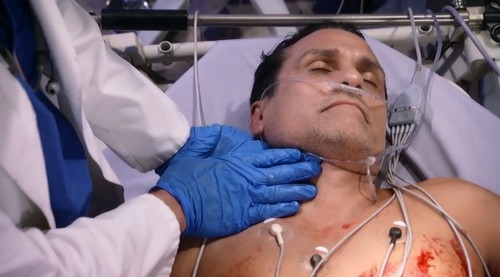 Sonny Corinthos (Maurice Benard) is barely clinging to life – check out these “General Hospital” spoilers about what’s going to go down in the aftermath of Sonny’s shooting. Consider the conversation between Sabrina Santiago (Teresa Castillo), Lulu Spencer (Emme Rylan) and Maxie Jones (Kirsten Storms). Maxie and Lulu gave Sabrina a whole new glimpse into a side of Michael Quartermaine (Chad Duell) that she’s never seen and didn’t even suspect.

Maxie and Lulu tell her that no matter how nice Michael looks in a suit behind the CEO desk at ELQ, he’s a born mobster. They tell her that Michael has killed more than once – when things got messy and needed to be deal with – Sabrina is stunned. Even as a little kid, Michael tried to kill AJ (remember the pillow incident?). He brutally beat Claudia Zacchara to death and took out Kobe. Let’s face it, Michael is dangerous.

Michael has been a Corinthos a lot longer than he’s been a Quartermaine. Maxie and Lulu told Sabrina that Michael barely knew AJ and that he was raised at the knee of Sonny Corinthos, mob boss, and heavily influenced by Stone Cold killer Jason Morgan. Sabrina is shocked. Sabrina will be even more shocked if Michael does what’s expected and takes over the reins of Sonny’s syndicate while the mob boss recuperates from his shooting.

This is all very Godfather – down to the names of the family members. If you haven’t seen the excellent Godfather I and II (and dismal third installment), watch it and get some insight into the Corinthos family from Mario Puzo’s the original Corleones. In the Godfather, son Michael was a college boy who took over running the family mob syndicate after his father passed away. Not that we expect Sonny to die – he won’t – but he is seriously injured. 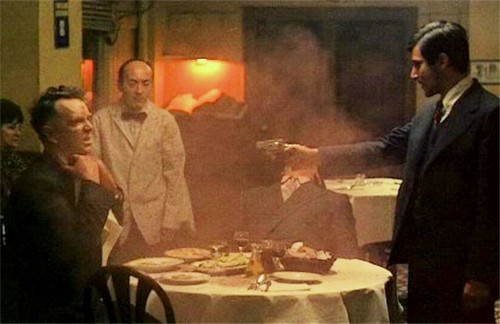 Another similarity between the Corleone and Corinthos clans is that they each have an idiot brother. The Corleones had Fredo and the Corinthos family has off-the-rails moron Morgan Corinthos (Bryan Craig). And there’s even a Sonny Corleone who was violent and impulsive like Sonny Corinthos. Sonny Corleone died in a spectacular hail of bullets and Sonny Corinthos has been shot numerous times over the years.

Also, Michael Corleone’s Italian wife was killed by a car bomb like Sonny Corinthos’ wife Lily Rivera. The parallels are significant between the two families, so Michael Corinthos Quartermaine stepping into his father Sonny’s shoes is the natural progression. Morgan can’t take over – he’s too erratic and now may be battling bipolar disorder. And Dante Falconeri (Dominic Zamprogna) is a cop so he won’t step up.

There was a reason that the writers set up the whole speech to Sabrina about Michael being a dangerous guy – it’s because he’s about to be… As a matter of fact, all three of the Corinthos boys are about to be. Look for Michael to take over the reins of the Corinthos syndicate, for Dante to use his police influence to find out who shot his father and punish them, and for Morgan to go after the likely shooter outside the bounds of the law in an unhinged fit.

Jean Passanante and Shelly Altman promised an overarching plot that would pull in all of the major Port Charles families and this would do it. Since Michael is part Quartermaine, part Corinthos, the Qs will be pulled into the mob business. Since Nikolas Cassadine (Tyler Christopher) has set himself up against Michael, that pulls the evil Greek/Russians into the mix. And with Lulu and Valerie Spencer (Brytni Sarpi) involved with Dante, that pulls the Spencers in – everyone will be mixed up in it.

And, very importantly, as Michael steps up to fill in for his father, Jake Doe (Billy Miller) will be right by his side, just like Jason always was for Sonny, even if Jake hasn’t recovered all his memories. He’s proved himself lethal and loyal to Sonny and we know he likes Michael even more. This is perfect. Look for Sonny to cling to life, maybe even languish in a coma for a bit, but then he’ll be back. But the question is, will he be the man he once was or will it take some time before Sonny is back to himself?

This is one to watch – can’t wait to see the first full fledged Passsanante/Altman plot. Hopefully it will turn the ratings around and bring back the fans. Stay tuned to CDL for more “General Hospital” spoilers, news and gossip!