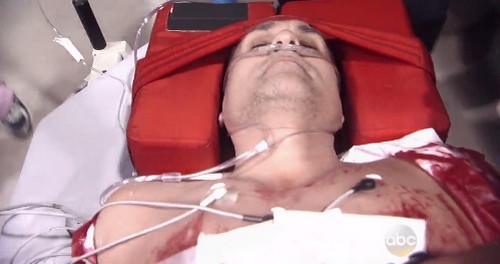 Here are some “General Hospital” spoilers for the Wednesday, September 9 episode of the ABC soap. It’s another red wedding, unfortunately for the millions of fans of Sonny, not a red herring! Let’s start with the big stuff first. Blood-soaked Jake Doe (Billy Miller) crashes Carly Corinthos’ (Laura Wright) wedding and stuns everyone with the announcement that the groom Sonny Corinthos (Maurice Benard) has been shot. Carly will be in disbelief for a moment, but then will have to acknowledge the awful truth that her gangster fiance was shot on their wedding day.

Jake doesn’t have a lot of information to give Carly other than Sonny was shot and has been taken to the hospital. He doesn’t know who did it. Dante Falconeri (Dominic Zamprogna) will check in with the PCPD looking for information. Morgan Corinthos (Bryan Craig) starts to go off the rails again and Michael Quartermaine (Chad Duell) is more worried than he thought he would be.

The wedding party all heads to the hospital. Will we see nuptials take place at GH today after Sonny comes out of surgery? Did you notice that when Jake rushed in to save Sonny that Sonny looked up into his face and thought it was Jason? He said “I knew you’d come – you always do.” It was perfect. With Sonny out of it, all he heard was Jake’s voice – and knew it was Jason.

But will Sonny remember it later? After the hubbub dies down, we’ll see some memories that flashed in Jake’s mind when he was saving Sonny. Jake can’t figure out what they mean and will have to talk to some other people. Sonny is headed into emergency surgery to save his life – it will be touch and go – but, of course, he’ll be okay. The family will all be there for him.

Commish Jordan Ashford (Vinessa Antoine) rants that no one near Sonny is safe. Jordan is horrified that TJ Ashford (Tequan Richmond) was kidnapped to lure Sonny into a confrontation. TJ, however, thinks he’s at fault, not Sonny and will not listen to what his mom has to say. Sonny is like a substitute Shawn Butler for TJ so he’s not going to give up his new faux-daddy mobster.

Speaking of murder, Kyle Sloane (Robb Derringer) reminds Anna Devane (Finola Hughes) that he’s the only one that knows she murdered Carlos Rivera (Jeffrey Vincent Parise). Anna’s in a tough spot now. Kyle has flat out told her that if she tries to send him to Pentonville for rigging the mayoral election, she’s going down for murder.

Sloane is punishing Anna because she won’t be his girlfriend. Kind of petty, but that’s what it is. But if Carlos turns out to be alive (there’s a rumor he is and is the one who shot Sonny), then Sloane will have no leverage over Anna. But since Sloane will be dead soon, all of this may be a non-issue. The question is who is going to take out Sloane? Could Anna do it to protect herself?

Later, Jordan gets with Anna to update her on Sonny’s shooting and TJ’s kidnapping. Jordan wants to work with Anna to clean up Port Charles and is sick of the mob running rampant all over town. Anna will have to lobby for the immunity deal for Sloane to save her own neck, even though he didn’t hold up his end of the deal – unless she and Jordan can back door Sloane somehow…

Also at the PCPD today is Julian Jerome (William deVry) – that should give him an alibi for the shooting, right? Julian goes to see sister Ava Jerome (Maura West) and they bond over the loss of their children. Ava wants to stop Carly from becoming baby Avery’s mom but can’t do anything from where she is and Julian talks about baby Leo and Olivia Falconeri (Lisa LoCicero).

Don’t miss a moment of Wednesday’s life or death episode then come back for more CDL “General Hospital” spoilers, news and more.