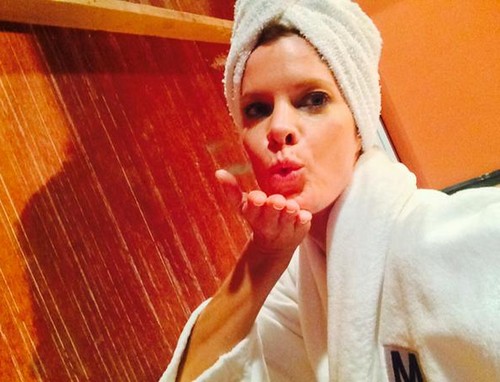 Here are some “General Hospital” spoilers for the live Monday May 18 episode! First, we’ll get to see who Nina Clay [Michelle Stafford] plans to “marry.” Monday is the second of the live GH episodes in May. Yes, someone does show up to claim the blushing – yet crazy – bride and it seems like some nuptials may begin. But Franco (Roger Howarth) won’t take this lying down. You know he’s not good at controlling his emotions and, by trying to stop Nina from making a mistake, he’ll end up humiliating her. Nina will not like that. Rumors are that Ric Lansing (Rick Hearst) is the lucky groom. Better get that panic room ready Ric!

The wedding itself may erupt in violence. There’s still a lot of angry mobsters lurking around Port Charles intent on getting control of the city and revenge on one another! For instance, remember Jake Doe (Billy Miller) and Sam Morgan (Kelly Monaco) are at the garage when Hayden Barnes (Rebecca Budig) showed up to spill Liz Webber (Rebecca Herbst) and Nikolas Cassadine’s (Tyler Christopher) dirty secret.

Problem is, Shawn Butler (Sean Blakemore) is also headed that way to exact revenge. Julian Jerome (William deVry) essentially sicced the Corinthos mob guys on Jake (not knowing his dear daughter Sam would be with him) but also called the PCPD to intervene and capture his rivals. But this won’t go quite as Julian planned and someone will be shot – likely Hayden!

That leaves Sam and Jake pacing the glossy floor tiles of GH waiting to hear if the b-tch survived. Jake won’t get to hear her truth and Nik will (hopefully) be able to intervene and talk Hayden down before she has the chance to finish blabbing. Meanwhile, Carly Corinthos (Laura Wright) will try to get Sonny Corinthos (Maurice Benard) to back down off of killing Jake.

She knows that it’s not as simple as Sonny sees it. First, Carly knows that since Jake is a CI for Commish Sloane (Grayson McCouch), he likely did not shoot Duke Lavery (Ian Buchanan) plus she knows killing Jake would be almost as bad as Sonny offing a cop. Carly will be terribly tempted to reveal Jake’s CI secret to Sonny if she can’t talk him down otherwise.

And, back to Julian, since Sam will come out of the garage shooting unscathed, he will owe Jake even more. Taking the blame for killing Duke plus keeping Sam safe should catapult Jake into Julian’s inner circle – especially now that he’s lost Carlos Rivera (Jeffrey Vincent Parise). His main sidekick was already heading out of town but now that Anna Devane (Finola Hughes) put a bullet in his chest, he may be taking a more extended leave of absence…

And there’s one more nugget to consider for today – – on Friday’s show, did you recognize who was flipping the credit cards at the end of the live show? That was Lilly Melgar – aka Lily Rivera – Sonny’s presumed dead first wife. Melgar explained away her presence on the live show as something she and the show runners cooked up at a Daytime Emmy after party, but could it be more than that?

There’s a “General Hospital” rumor that Lily will return to Port Charles to let Sonny know that she’s alive and so is their daughter. And the gossip says that their child is Rosalie Martinez (Linda Elena Tovar). Not that Port Charles needs another Corinthos offspring – that man is as fertile as the plots on GH are long, but still, it’s an exciting possibility.

Tovar hasn’t scored a lot of screen time recently, but a revelation this big could change things drastically. And how exciting would it be for Carly to have a rival for Sonny’s affections – someone that he thinks of as almost saintlike. Carly would definitely seem tarnished by comparison. If Sonny ditched Carly for wife #1, that would free Carly up to romance Jake once he’s back to being Jason and split from Liz. Just some speculation on future plot possibilities…

Be sure not to miss Monday’s exciting #GHLive, then head back to CDL for lots more “General Hospital” spoilers, gossip and casting news!