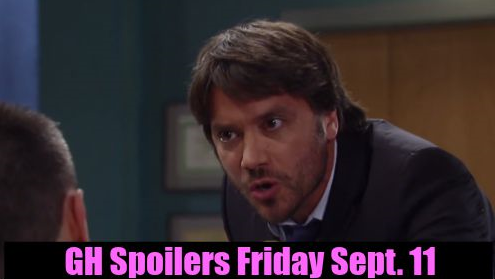 Here are some “General Hospital” spoilers to get you ready for the September 11 episode. Lots happening on today’s cliffhanger Friday. First, Michael Quartermaine (Chad Duell) (or should we call him Michael Corinthos?) is stepping up as head of the Corinthos clan in a big way – as CDL exclusively predicted in a major spoiler post this week. Michael will continue to give orders to the Corinthos underlings and Sonny Corinthos’ (Maurice Benard) respond to his obvious authority and do what Michael says.

Michael got rat fink Ric Lansing (Rick Hearst) under control and now he’s ready to reconcile with his adoptive father, even though Sonny is comatose and can’t hear him. Today, Michael will sit with Sonny and tell him he loves him and beg him not to leave them – this could be what helps Sonny pull through. And if Sonny is paralyzed for a while, look for Michael to continue to step up and be the boss.

Sonny’s other son Morgan Corinthos (Bryan Craig) is off the rails again. He shows up to the PCPD livid and tries to attack Julian Jerome (William deVry) certain that he’s responsible for Sonny’s shooting. Morgan rants to Dante Falconeri (Dominic Zamprogna) to lock Julian up. Morgan will be held back but then Dante goes on the offensive and attacks Julian.

TJ Ashford (Tequan Richmond) shows up to GH distraught and tells the Corinthos family that it’s all his fault that Sonny was shot. The family will huddle around TJ and tell him that it’s not his fault – it’s the fault of the person that shot him – and they’re all pretty sure Julian is responsible, but he’s not. When will the real culprit be revealed? When will we see the other mobsters?

Julian may be forced to reveal who it is to get the pressure off of him – but won’t tell the cops. Instead, he may tell the calmest of the Corinthos kids, Michael, that there are other influences at work in Port Charles to give him the chance to defend himself. After all, with TJ caught in the crossfire that means Molly Lansing Davis (Haley Pullos) also could be and that would be trouble for Julian.

Also at GH, Patrick Drake (Jason Thompson) is furious that Sam Morgan (Kelly Monaco) put herself in harm’s way when she was out with Jake Doe (Billy Miller). Patrick wants to know what she was doing with Jake at the waterfront and how she ended up involved. Sam is flustered because he won’t stop ranting and let her talk. Patrick needs to act quickly before Sam gets in deeper with Jake.

On the Jake front, a bloody Jake comes home and Elizabeth Webber (Rebecca Herbst) is freaked out over the blood. At first she thinks it’s Jake’s but isn’t much happier to find out it was Sonny’s and that Jake was involved in more violence. Jake tells Liz about some memories flashes he had after the incident and Liz immediately recognizes what he’s recalled.

The recovered memories lead to Jake’s true identity so Liz tries to send Jake off another way. Wow. Liz continues to betray Jake at every turn. Liz is going to be in big trouble when Jake turns to Sam and she helps him unravel the strands of his memories and Jake realizes that Liz has been lying to him for the past six months and keeping him from his son.

A frustrated Anna Devane (Finola Hughes) tells Jordan Ashford (Vinessa Antoine) that Kyle Sloane (Robb Derringer) betrayed her. Anna doesn’t want to go down for shooting Carlos but also doesn’t want Kyle and Nikolas Cassadine (Tyler Christopher) to get away with rigging the mayoral election. Sloane is with Nikolas and tells him he wants what he promised.

Sloane is not ready to go quietly and lays into Nikolas to help him as he vowed he would if Sloane did his dirty work. The bad news is that Sloane airs all the dirty laundry in front of Hayden Barnes (Rebecca Budig). Will all this talk of Nikolas’ shady business conjure up more memories in Hayden? How long until Hayden realizes she does know who Jake really is?

After Friday’s show, check back with CDL for “General Hospital” spoilers for all of next week plus Monday’s episode and other GH news and gossip.