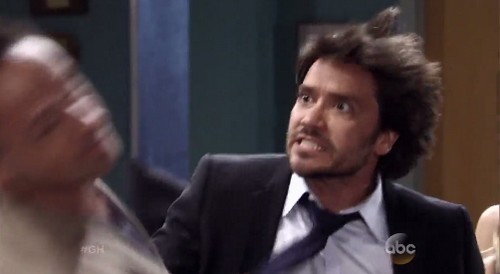 Check out these “General Hospital” spoilers for the Thursday, September 10 episode. It’s mostly attempted murder news today in Port Charles. Let’s start with the really bad news – Sonny Corinthos (Maurice Benard) is getting a transfusion because he lost a lot of blood. Carly Corinthos (Laura Wright) misinterprets Patrick Drake’s (Jason Thompson) update as good news, but then Dr. Drake rushes to make is clear that he’s not saying Sonny will pull through – although we all know that Sonny will survive this.

We will see Sonny on a ventilator looking like death today and Morgan Corinthos (Bryan Craig) will angrily vow to kill Julian Jerome (William deVry) for this. Morgan will have to get in line to take vengeance on Julian. We’ll see Dante Falconeri (Dominic Zamprogna) intercept Julian who was leaving the cells from a visit with Ava Jerome (Maura West).

Dante accuses Julian of trying to kill his father and Julian, of course, denies that he’s involved with the mob and had anything to do with Sonny being injured. Julian says his hands are clean (but they’re not quite). Very likely, Julian knows who is responsible for Sonny’s shooting since he gave territory and men to the new mob influence in town, but he wasn’t directly involved.

Dante puts his career at risk when he assaults Julian at the PCPD. Dante will punch Julian and that will turn into a fracas. Could Dante be fired over this? That would set him up to go to work for the Corinthos syndicate on the other side of the law – could be an interesting twist – hmm… Also going off about the shooting is rat fink Ric Lansing (Rick Hearst).

Ric was responsible for letting henchman Charlie out of jail which then led to Sonny’s shooting. But instead of taking blame, Ric deflects and will cause a major upheaval at the hospital. Ric is genuinely distraught that Sonny has been shot and may be dying and makes an ass of himself. Carly already hates Ric, so she likely won’t want him there. Ric is off the rails – like Morgan…

Also at the hospital is Jake Doe (Billy Miller) who is very uncomfortable with the attention he’s getting as Sonny and TJ Ashford’s (Tequan Richmond) hero. Yes, he did save them, but he did it on auto pilot and he’s very confused right now. Sam Morgan (Kelly Monaco) reminds him that he was like an efficient and deadly killing machine when he took out the other mobsters.

Jake has some memories float to the surface as a result of all of this and they don’t make sense to him. Will Jake see himself in a similar situation with Sonny before? Heaven knows he’s been there time and again. Will Sam recognize any of these recovered memories as Jason’s? Not at first. But Sam will try to help him sort out what he’s recalling.

Lulu Spencer (Emme Rylan) calls up Olivia Falconeri (Lisa LoCicero) to tell her about Sonny. Olivia will be shocked that her mobster baby daddy is near death. Will Olivia go confront her other mobster baby daddy Julian and accuse him of the shooting? Julian has got to be tired of all this nonsense. Of course, Julian was on the docks right before the shooting – did he meet with the killer?

Jordan tries to talk sense to TJ at the PCPD and says he needs to stay far away from Sonny. TJ isn’t having it. He just wants to get away from his mom and head over to GH to check on Sonny. TJ will not give up the mobster – he sees Sonny as a surrogate Shawn – and Jordan will not be happy with his stubborn refusal to see that his life is on the line.

In non-mob news, Tracy Quartermaine (Jane Elliot) has a serious talk to Paul Hornsby (Richard Burgi) about him still being married. Tracy wants to know if he’s ending his marriage to Jenny Eckert – does that mean Tracy wants a relationship with Paul? Paul makes a big decision – likely to end his marriage. Either way, it sets the stage for a recast Jenny Eckert to visit Port Charles.

Don’t miss a moment of today’s show to see Sonny fighting for his life and the Corinthos clan fighting with each other and their perceived enemies. And check back with CDL for tons more “General Hospital” spoilers and gossip.