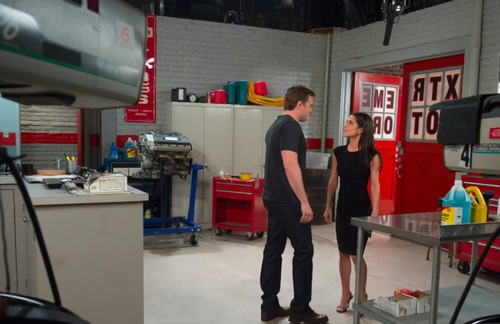 Here are some “General Hospital” spoilers on the Thursday June 17 episode of the hit ABC show. Lots to see on today’s show. Over at ELQ, Denise DeMuccio (Maura West) shows up to rant to Michael Quartermaine (Chad Duell) about his nanny Sabrina Santiago (Teresa Castillo) not letting her see baby Avery/AJ. Michael will remind her that he told her to call and make an appointment. Denise will leave upset and run into Morgan Corinthos (Bryan Craig) and they’ll soon be smooching up a storm again – especially since Silas Clay (Michael Easton) spurned Ava.

Morgan will tell Sonny Corinthos (Maurice Benard) that he has to make things right with Kiki Jerome (Haley Erin) and will admit that he lied to her after she overheard them talking. But will Kiki found out what Morgan is hiding before he gets the chance to come clean or convince her nothing is going on? Kiki will go to her dad Silas to talk to him about Morgan. Will Silas hurt Kiki with the truth hoping to spare her from bigger hurts later if she and Morgan get more serious and he cheats with her mom Ava.

Sam Morgan (Kelly Monaco) reports to Tracy Quartermaine (Jane Elliot) and Sabrina that Rosalie Martinez (Linda Elena Tovar) spoke to her other boss but then the call cut off. Sam reveals that she didn’t have time to recognize the voice. Jake Doe (Billy Miller) lurks outside the Q mansion and will reveal himself to Sam and let her know about his unfounded suspicions. They’ll team up and Jake will tell her that he blew it that she placed a bug in the phones at ELQ.

That will let them know why Rosalie’s call was cut off. Now, acting as a team, Sam and Jake will put their heads together to figure out how to entrap Rosalie and make her come clean about who she’s working for that’s plotting to take over ELQ. But will their efforts be in time? Nikolas Cassadine (Tyler Christopher) has 50% of ELQ and is so close to a takeover. Nik is even willing to pimp out his sister Lulu Spencer (Emme Rylan) to land Dillon Quartermaine’s (Robert Palmer Watkins) shares.

To that end, Nikolas will go to see his sister to figure out how to best manipulate her and will find Dillon there with Lulu. This is right where Nik wants Dillon but will he bite and do what Nik wants? Lulu will be suspicious of Nik’s end goals and his methods, but will she fall prey to his plotting? Of course Liz Webber (Rebecca Herbst) knows all about what Nik is doing and she’s freaking. Liz will talk to Patrick Drake (Jason Thompson) about Jake who will soon be suspicious that Jake is Jason.

Valerie Spencer (Brytni Sarpi) will overhear a conversation that lets her know clearly that Lulu is keeping secrets from Dante Falconeri (Dominic Zamprogna). Will this change how Valerie thinks about Dante. We know she’s protective of him but will Valerie make a move to protect Dante from Lulu or will she confront Lulu about it? Either way, Dante and Lulu are going to face some trying times that will put their love to the test with the secret keeping and Dillon being back in town.

Be sure to check back with CDL for more “General Hospital” spoilers after Thursday’s big episode.