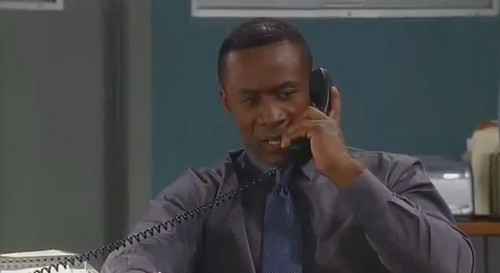 Here are some “General Hospital” spoilers for the Tuesday, May 19 show. GH is back to standard pre-taped shows today! I have one high note and one low note of Monday’s live show. Did you notice that you could clearly see the fake blood squib beneath Carlos Rivera’s (Jeffrey Vincent Parise) shirt right before Anna Devane [Finola Hughes] shot him? It looked like a thick rectangle on his left pectoral. A bit distracting. Other than that I thought it went very well and I loved, loved, loved the end of the show with little Nicolas Bechtel doing the credit, boogying around then being dangled by Billy Miller and Tyler Christopher. Too cute!

Now on to Tuesday! Lots happening on today’s show. First, let’s talk about the impromptu nuptials of Nina Clay (Michelle Stafford) and Ric Lansing (Rick Hearst). What the heck was that? If it’s not Franco (Roger Howarth) having a bizarre drunken nightmare, perhaps it’s a legal stratagem. After all, Nina is still being denied her money and Ric is a lawyer. Perhaps now she’s married, he can be her conservator and get her money released – that way she won’t be dependent on Franco’s schemes for her upkeep.

But this absolutely cannot be the end of Ninco – I love them together! Franco will offend Nina terribly after she tells him to leave so she can consummate her new marriage with Ric. I don’t really see the two of them getting it on, though, even if the marriage is legitimate. Shagging Nina at this point seems like taking advantage since she’s like a confused teenager acting on a whim. My money is on this being a business deal and the sex talk is just to upset Franco! Because honestly, I don’t think Ric deserves any happiness anytime soon. Sad that the serial killer is more likable, right?

Also, Olivia Falconeri (Lisa LoCicero) makes a big move to protect her new baby. “General Hospital” rumors indicate that Olivia and Ned Ashton (Wally Kurth) have devised a plot. Ned will make a large donation to GH – or directly to hospital chief Dr Liesl Obrecht (Kathleen Gati) – to back them up. They will fake the baby’s death and Obrecht will write up a death certificate and say the baby was cremated. They will also embroil Dante Falconeri (Dominic Zamprogna) in the plot.

Julian Jerome (William deVry) will come home from his confrontation with Sonny Corinthos (Maurice Benard) and find an unexpected guest – is it Alexis Davis (Nancy Lee Grahn) there to pick up her things from his place? Then Julian will get a call from the hospital with the heartbreaking “news” that his son has died. This will allow Olivia and Ned to take the baby and leave town with Julian having no clue his son survived. How long with this hold out though? This is just to cover LoCicero’s maternity leave, so this story line will gain traction again mid-summer!

Jordan Ashford (Vinessa Antoine) will have to tell son T.J. Ashford (Tequan Richmond) that she’s an undercover cop. She will also come completely clean to Shawn Butler (Sean Blakemore). Interestingly, now that Jordan’s storyline is changing, Shawn’s character is leaving the show. Blakemore finished filming this week but he’ll have scenes for a while yet since they film ahead. You have to wonder if he’ll be another casualty of the mob war, if he’ll be sent to Pentonville or he’ll leave town.

Sonny’s crew is getting slim! We know that Jordan will appeal to Scott Baldwin (Kin Shriner) for help – we she use him to help Shawn get a break for the attempted shooting? Carly Corinthos (Laura Wright) will try to talk Sonny about Jake Doe (Billy Miller) but he won’t listen to reason. Carly knows Sonny will be back to jail if he doesn’t back off especially since Jake is working for Commish Sloane (Grayson McCouch). Carly will come really close to telling Sonny that Jake is a CI, but will have to stop herself, because Sonny also doesn’t like narcs!

Sam Morgan (Kelly Monaco) and Jake are at the hospital waiting to find out about the just-shot Hayden Barnes (Rebecca Budig). Sam will tell Liz Webber (Rebecca Herbst) that Hayden was trying to tell them something when she was shot. She’ll ask Liz who could have talked to Hayden about Jake’s identity. Hayden should come out of this okay but “General Hospital” rumors indicate that Nikolas Cassadine (Tyler Christopher) is really embracing his Cassadine roots. Perhaps he’ll show up to Hayden’s GH bedside and make it clear if she blabs Jake’s secret, the shooter won’t miss next time!

And the good news is that if Nik’s assassin’s bullet was the one that hit Hayden, Shawn may get off scot-free. But still, I imagine he’s on parole for something and lurking around with a silencer should still get him in trouble, right? And Jake will also push back on the cops – now that he’s close to finding out who he is, he’ll push Sloane to let him out of the CI agreement, especially now that people are taking shots at him. Sloane will threaten him again, but Jake will push back hard and won’t care about the consequences.

It will be an exciting episode! Can’t wait to see more – especially on the Nina – Franco – Ric drama! Tune in for today’s GH then come back to CDL for lots more “General Hospital” spoilers and gossip.

Watch the General Hospital video promo sneak peek for May 19, 2015 below: