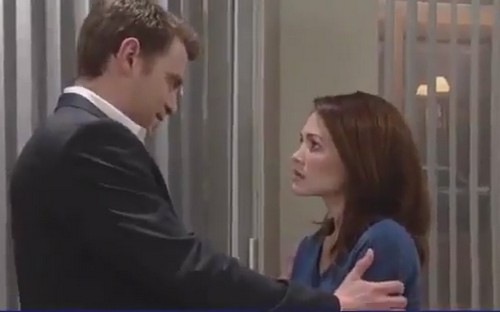 Here’s a glance at some “General Hospital” spoilers for the Wednesday May 13 episode of GH. But first, I have to mention the best line on Tuesday’s show when Liz Webber (Rebecca Herbst) tried to say Jake Doe (Billy Miller) couldn’t have shot Duke Lavery (Ian Buchanan) because he was with her. Then Dr Obrecht (Kathless Gati) says Jake gave her the petite mort (little death – aka the “big O”) then went and gave Duke the grand mort (aka real death). It was funny and clever… Now on to today’s big show!

Today, Jake will tell Liz that they can’t be together. He doesn’t want to dump her but he knows once word gets out that he’s the “trigger man” for the Duke shooting, Sonny Corinthos (Maurice Benard) and his crew will come at him guns blazing and he doesn’t want her caught in the line of fire. Liz won’t be happy, but Jake will be firm about this because he wants her safe. Will Liz believe he’s the shooter since she knows he’s really Jason? Or will she push back?

And, when Carly Corinthos (Laura Wright) hears that Jake is a suspect in Duke’s shooting, she’ll know it’s not true. Since Carly knows Jake is a CI and couldn’t kill someone, she’ll try and protect him but Sonny won’t like this. Carly will warn Jake to be careful but the guy doesn’t have a lot of options and will have to press on taking the blame for Carlos Rivera’s (Jeffrey Vincent Parise) violent act. Of course, Carlos won’t come forward and tell all of Port Charles he’s the shooter, so Jake will suffer in the court of public opinion.

Meanwhile, Anna Devane (Finola Hughes) wants to bring Duke’s killer to justice and will work with Commish Sloane (Grayson McCouch). Anna will tell him that Carlos has to be the shooter since he’s already pegged for a death and awaiting trial for Ava Jerome’s (Maura West) killing so they know he’s capable of murder. Plus he’s nowhere to be found and that’s pretty suspicious. Sloane will be with Anna through this tough time and this may spark a future romance. Anyone for a “Slovane” romance?

Shawn Butler (Sean Blakemore) and Sonny go to the hospital to confront Julian Jerome (William deVry) since he’s the obvious (and really only) candidate for who would take out a hit on Duke. They will threaten, things will get ugly but then, according to “General Hospital” spoilers, Jake will show up in time to defend Julian which will further ingratiate him with the mob boss. Jake can take Julian away safely and will follow Sloane’s plan and tell Julian that he was brought in for questioning.

Also on the Julian front, Olivia Falconeri (Lisa LoCicero) is freaking out because she was already worried about the danger of being Julian’s baby mama and now he took out a hit on Duke! Olivia will beg Dante Falconeri (Dominic Zamprogna) to get her and his new little brother out of town and safely away from Julian. Between Ned’s money and Dante’s law enforcement ties in PC and elsewhere, they should be able to do this.

And finally, Lulu Falconeri (Emme Rylan) will come to see Nikolas Cassadine (Tyler Christopher) and will happen upon Hayden Barnes (Rebecca Budig) hanging out at Wyndemere. Lulu will confront him and demand to know if he was in on Hayden’s scam. Nikolas may just say he’s taking in random women who need a place to stay like he did for Valerie Spencer (Brytni Sarpi). Hayden and Valerie will also meet and have to stake out their territory in the mansion.

There’s also some more violence in store for Port Charles soon. There will be another mob shooting perhaps at an upcoming wedding. And there will be a plane crash that will leave leave the impression that someone has died. Who can it be? Will it be a private jet crash to make it look like Olivia and her son died to get her away from Julian? Or will it be Ric Lansing (Rick Hearst) so that he can go off the grid and plot his revenge? Or will it be Ned Ashton (Wally Kurth) in a private jet to explain his departure from GH with room to bring him back later.

Check out Wednesday’s show then come back to CDL for more “General Hospital” spoilers and rumors!

Enjoy the preview video for the General Hospital May 13, 2015 episode below: