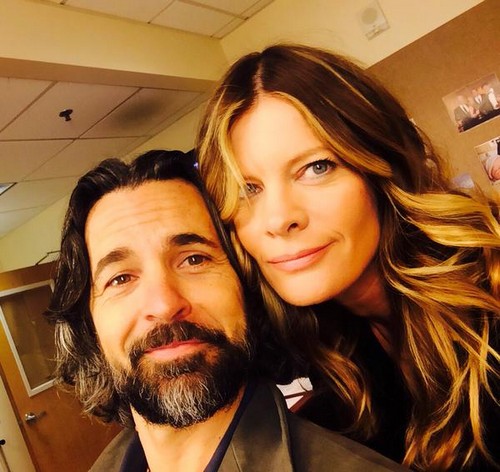 “General Hospital” spoilers and news tease that the week of May 18 – 22 will be packed full of drama, not that there is ever a dull day in Port Charles. According to GH rumors, fans of the ABC soap will not want to miss a single episode of the excitement. The explosive week kicks off with a wedding, which we all know can’t go off without a hitch on the daytime drama, and ends with a mysterious newcomer in Port Charles. According to “General Hospital” spoilers, this is what GH fans can expect to see during the week of May 18.

Monday May 18: “General Hospital” spoilers tease that Monday will be the second live episode of the soap airing on ABC – and GH fans can expect to see a wedding in Port Charles. Of course, it wouldn’t be a GH wedding if a shoot-out didn’t ensue. According to GH spoilers, one of our favorite mobsters will get caught in the crossfire and rumors are it’s Nina and Ric who are getting married!

Tuesday May 19: On Tuesday’s episode of “General Hospital” spoilers tease that Olivia Falconneri (Lisa LoCicero) breaks some sad news to Julian Jerome (William DeVry) about the baby, meanwhile across town Franco and Nina (Michelle Stafford) continue to bicker. Spoilers also reveal that Jordan Ashford (Vinessa Antoine) blows her cover – and finally comes clean to her son TJ and reveals that she is not the criminal he thinks she is, she is actually an undercover cop.

Wednesday May 20: Anna Devane (Finola Hughes) find herself in a bit of a pickle after shooting Carlos, but according to “General Hospital” spoilers Detective Sloane will come rushing to the former police commissioner’s aide. In other GH news, Kiki (Hayley Erin) and Morgan (Bryan Craig) wind up in a huge fight on May 20 – and it could mean the end of their relationship, meanwhile across town Olivia sits down with her son Dante and fills him in on her plan.

Thursday May 21: Thursday’s episode of “General Hospital” will find Julian Jerome seeking comfort from his on-again girlfriend Alexis (Nancy Grahn) after he receives some upsetting news from his baby-mama Olivia. Julian and Alexis won’t be the only couple getting some screen time on May 21, GH spoilers also tease that fans can expect to see Serena (Theresa Castillo) and Michael (Chad Duell) take their relationship to a new level.

Friday May 22: According to “General Hospital” spoilers for Friday May 22, Shawn learns that his girlfriend is actually not the badass mobster he thought she was – and Jordan has been lying to him all along, she is actually an undercover police officer. GH fans will not want to miss the epic confrontation! Also, “General Hospital” coming and going news reveal that a mysterious visitor will arrive in Port Charles on May 22.

So GH fans, who do you think will get caught in the crossfire this week? Is Olivia’s baby going to be okay, what news does she break to Julian? How will TJ and Shawn react to Jordan being an undercover cop? Who do you think the mysterious visitor is that arrives in Port Charles? Let us know what you think in the comments below and don’t forget to check CDL tomorrow for more “General Hospital” spoilers and news.

Here are the General Hospital video promos for the Monday May 18 live show!