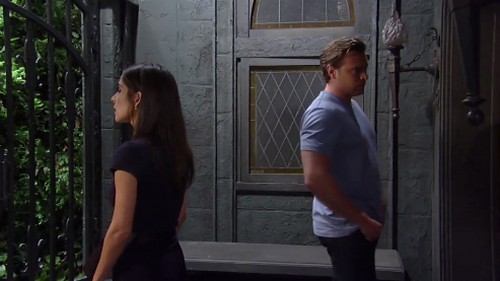 “General Hospital” spoilers indicate that Jake may not make the obvious choice when it comes to his love life once he realizes that he’s Jason Morgan. Although it won’t be official until sweeps, Jake Doe’s (Billy Miller) identity as Jason Morgan is becoming obvious. Despite him being married and Liz Webber (Rebecca Herbst) betraying him, don’t count on Jake to do what you think!

Although we haven’t seen it yet, in the aftermath of the Sonny Corinthos (Maurice Benard) shooting, Jake will have a flashback to Faison, disguised as Duke Lavery (Ian Buchanan) shooting him. Liz has already told Jake that he’s feeling loyal and tied to Sonny simply because of the adrenaline of the situation, but she’s lying, lying, lying. Liz will recognize this memory in a moment.

Once again, Liz is ready to tell Jake the truth, but she won’t go through with it. With her continuing to lie until she’s caught out and can’t keep up the charade, you’d think Jake will feel so betrayed that he will be 100% done with Liz. But the outcome of the Jake as Jason revelation may not play out the way we assume when it comes to Jake and the women in his life – Liz and Sam Morgan (Kelly Monaco).

Remember, Jake has no feelings for Sam – other than professional respect and friendship – but he’s deeply in love with Liz. That will be hard for Jake to balance out. Kelly Monaco recently said of Jake and Sam’s future, “Sam and Jason are going to have to fight for their love and maybe fall in love all over again. Right now, you’re looking at two people who don’t know each other.”

Monaco says Sam and Jason will have to start over if they are going to rekindle their relationship. But will Jake/Jason even go down this road given that he’s head over heels for Liz? Sure Jake will be mad at Liz, but he loved her enough to ask her to marry him, so is he willing to throw it away or can he forgive Liz? Stone Cold Jason Morgan was not much of a forgiver, but Jake is a new man.

In fact, Jake is much like what Jason Quartermaine was like prior to his brain-injuring accident. In this new iteration, Jake has much more capacity to forgive than the Jason of old ever did. And that might just well give Liz and Jake a fighting chance and spell the end of JaSam for good. For fans, this is a tough one. Fan polls consistently rate Liz and Jake as a favorite couple and they want them together.

Sure Jason and Sam were a fave couple back in the day, but their time may be done and this may be the age of Liz and Jason. What we do know is that neither Liz nor Sam will give up on Jake/Jason without a fight. But don’t look for Jason to necessarily go running back to his wife Sam, but may well end up with Liz – the woman who will do anything to keep him in her life! Stay tuned to CDL for more “General Hospital” spoilers on Jake, Liz, Sam as well as gossip, news and more.