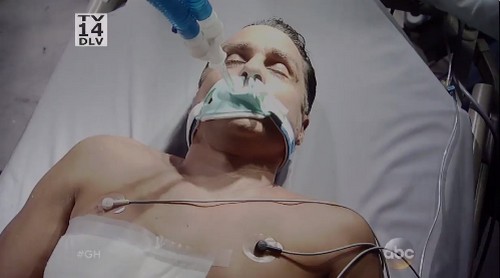 Here’s a major “General Hospital” spoiler about Jake Doe’s (Billy Miller) identity and how it ties into the shooting of Sonny Corinthos (Maurice Benard). You’ll recall that when Sonny had just been shot and was out of it, he recognized Jason Morgan in Jake’s voice and actions as his old mob buddy used his extraordinary skills to save both Sonny and TJ Ashford (Tequan Richmond).

Sonny said he knew “he” meaning Jason would come for him because he always does. Those words confused Jake but that’s not all that Sonny has to say on the subject. Sonny speaks from what could be his deathbed after serious surgery that will likely leave him paralyzed and has more to say to Jake but he’s speaking to Jason. Sonny will survive and this will change their relationship.

Sonny will continue, in his pain-medication and trauma-induced delirium, to speak to Jake as if he was Jason and will talk about his loyalty and how he’s always there for him. This casual and affectionate conversation will trigger more memories in Jake and will be the first real step that Jake has towards recovering his memories and remembering who he is, or at least who he was to Sonny.

When Jake shares this conversation with Liz Webber (Rebecca Herbst) she will again do the wrong thing and not help Jake to understand who he is really is. Instead, Liz will tell him that Sonny went through a major trauma and is babbling incoherently. Liz will work hard to convince Jake that Sonny has made a mistake and doesn’t know what he’s saying. This is all about to come crumbling down around Liz.

Frustrated, Jake will share the same information with Sam Morgan (Kelly Monaco) who will have another take on it. Sam will explain the close relationship that Sonny and Jason had and tell him they were more than just mob business partners, but were as close as brothers. Sam has already noticed that Jake’s actions mirror Jason’s and now this is a new twist.

But Sam won’t jump to the conclusion right away that Jake is Jason because she’s sad about her and Jason’s anniversary and then Patrick Drake (Jason Thompson) pops the question. This distracts her from considering Jake’s true identity. But with Sonny’s talk and then some other revelations from Hayden Barnes (Rebecca Budig) and possibly Laura Spencer (Genie Francis), Jake will see the truth.

Jake will be further betrayed this week by Liz who will tattle to Nikolas Cassadine (Tyler Christopher) about Sonny’s bedside babbling to Jake. Nikolas encourages her to remain calm but Hayden may overhear and this is what triggers her memories and puts her with Jake for a serious conversation about who he really is. Nikolas can’t stop the ball from rolling.

But what’s really frustrating for Jake is that even when he discovers he’s Jason Morgan, that won’t mean anything to him other than a name. Jake will hide the knowledge for a while to test the waters with people and try to understand what this means, work through his feelings about Liz’s lies and decide what his next move is.

Knowing his name does not restore Jason’s memories. He’ll know he has family but can’t remember them, knows he has kids but can’t remember them either. Jake will struggle with this revelation and also with whether to tell Sam he’s her husband – a hard one since she’ll be recently engaged to Patrick and so obviously in love. The point will be moot by November sweeps, though, when it’s rumored that Laura will publicly spill the beans on Jake’s true identity.

Stay tuned GH fans – we’re almost (thankfully) at the end of this overlong reveal of Jake’s identity. Be sure to check back with CDL often for more “General Hospital” spoilers, news and updates.