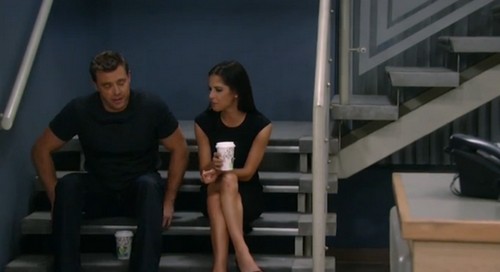 Summer is heating up on GH in Port Charles – check out these equally hot “General Hospital” spoilers for the Thursday, July 2 episode of the hit ABC soap. Jake Doe (Billy Miller) is ready to get his hands dirty and dig into Nikolas Cassadine’s (Tyler Christopher) dirty laundry looking for something to leverage to get the Quartermaine’s back control of ELQ. Jake runs into Sam Morgan (Kelly Monaco) who is missing Jason bad and then he shows up to offer her the chance to get back at Nik and Sam is ready to join team ELQ to get some payback. But does something seem familiar about Jake that reminds her of Jason?

Sam already suspects that Nik is hiding something and not only does she wants to get ELQ back in the Q’s hands, she wants to know what’s up with Nikolas and why he’s not acting himself. Nikolas had a bad morning with a butt chewing by Jake then Sam then son Spencer Cassadine (Nicolas Bechtel) will turn up to Nik’s newly minted CEO office to ask why his dad took the company from the Quartermaines and why he’s neglecting Spencer. Will Nik come clean with Spencer or lie? He’ll lie.

Over at Ruby’s, Franco (Roger Howarth) runs into Kiki Jerome (Hayley Erin) who is fresh from a boink fest with her BF Morgan Corinthos (Bryan Craig). Franco tries to warn her that Denise DeMuccio (Maura West) and Morgan are too close. Franco just wants to protect Kiki but the naïve girl will tell him that nothing is up and she won’t want to see the truth.

The truth is, Morgan and Denise are about to be getting busy. An upset Denise showed up looking for Silas Clay (Michael Easton) to cry on his shoulder about being denied a visit with baby Avery. Instead, she finds Morgan practically naked wearing just a lap blanket. Morgan won’t be wearing that for long either. Denise is hurt and wants comfort and Morgan just wants Denise. They will go too far this time.

Speaking of too far, Dante Falconeri (Dominic Zamprogna) is back in Port Charles convinced that Lulu Spencer (Emme Rylan) is cheating with Dillon Quartermaine (Robert Palmer Watkins). Valerie Spencer (Brytni Sarpi) comes to check on Dante who tells her that Lulu is being unfaithful and she will comfort him, but how much comfort will she offer?

Last time, Valerie stopped the kiss and encourage Dante to not leap to confusions. But now that Dante is sure he has “proof” will Valerie green-light some hanky panky? Last, Luke Spencer (Anthony Geary) bursts into the room expecting to find a bound and gagged pair of sons – Lucky Spencer (Jonathan Jackson) and Ethan Lovett (Nathan Parsons). But all is not as it seems with this “kidnapping.”