‘General Hospital’ Spoilers: Liz and Jason’s Son Alive After All – Jake Returns From The Dead? 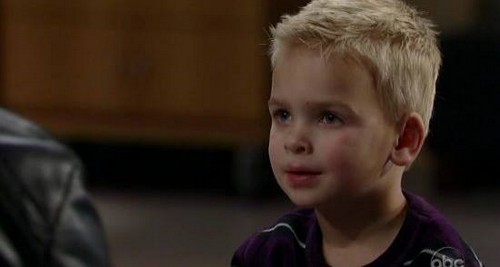 Here’s a “General Hospital” spoiler that’s interesting, if dubious. Rumors are swirling that Liz Webber’s (Rebecca Herbst) son by Jason Morgan (Billy Miller) that she had while still married to Lucky Spencer (Jonathan Jackson) is still alive! The child’s name was Jake Spencer and, back in 2011, the poor little tyke was left unattended and he wandered into the street only to be run down by Luke Spencer (Anthony Geary) who, at the time, was assumed to be his grandfather and was irresponsibly driving drunk.

There’s talk that baby Jake, who was four when he died and would be about eight or nine at this point, is really alive. With soap opera rapid aging syndrome (SORA) applied, he could be a teenager by now. Here’s why this storyline is problematic – Jake was on life support after the hit and run, and was diagnosed brain dead, then Liz donated his kidney to save Josslyn Jacks (Hanna Nordberg). I’m okay with someone coming back from the dead because there was a secret plot we didn’t know about, but where did that kidney come from if little Jake is still alive?

The rumor is that Lucky will show up in town and hand the kid off to Liz as a parting gift before he heads out of town again. Jonathan Jackson is busy with his own hit ABC show Nashville and can’t stick around – he’s only coming back to reprise his part during the Luke Spencer/Anthony Geary farewell storyline. Plus Lucky is “kidnapped” right now (or is he?) and so you have to wonder if little Jake is duct taped to his would-be dad.

We’ve seen “General Hospital” spoiler footage of Lucky at Liz’s door, so 50% of the rumor is true, but where would little Jake have been all these years since he’s not even Lucky’s son? Would Lucky have kidnapped Jake out of anger? Or did Helena Cassadine (Constance Towers) pull off yet another Morgan/Spencer kidnapping and steal the kid? If someone goes missing in Port Charles, Helena is your go-to kidnapper of choice.

The whole thing seems implausible, HOWEVER, it would be a plot of interest since Jason is back from the dead and if his and Liz’s child was alive, that would be another tie between them. Once Jason knows Liz was holding back on his identity, he will have to be pissed off at her betrayal BUT if their kid was alive, it might temper his temper.

In contradiction of this rumor, is another “General Hospital” rumor that Jake will wander by the Port Charles cemetery soon and see little Jake Spencer’s grave and will have a memory flashback. Of course, it could be an empty grave, and plenty of the city’s residents have risen from the dead, often more than once. If there’s anything you can count on in Port Charles is that death is never the ending – that and Lulu Spencer (Emme Rylan) will continue to be kidnapped.

Lulu is the resident kidnapping record holder with either eight or nine kidnappings, usually Cassadine-related. But I digress – back to little Jake. Hmm… I would be into Jason having his offspring returned to him since he never got to really know the child, but he still has Danny to get to know. My money is that this rumor is just that, a rumor, a wild speculation – a spitballing of “General Hospital” theories and prognostications. In other words, highly unlikely to come to fruition.

Be sure to watch GH every day then head back to CDL on the daily for tons more “General Hospital” spoilers, gossip and casting news!