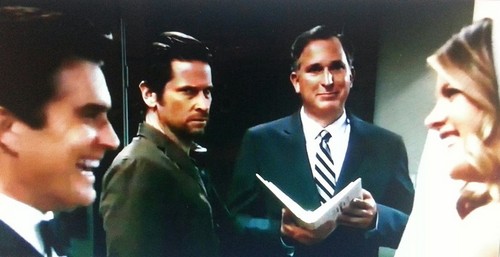 “General Hospital” spoilers reveal that the Nina Clay (Michelle Stafford) and Ric Lansing (Rick Hearst) marriage farce will continue for some time. You’ve got to feel bad for woman-child Nina wandering around Port Charles like a naif. Granted she did kidnap Ava Jerome’s (Maura West) baby, but in a delusional state she was convinced baby Avery belonged to her.

And 20 plus years in a coma can’t have done Nina much good. Think about it. She was married and expecting a baby then bam – Nina wakes up and there’s no husband, no baby and her brain is still just a little outside of her teens. But Nina looks like an adult so she’s been treated like one and even prosecuted as one under the eyes of the law.

Silas Clay (Michael Easton) rejected her and mom Madeline Reeves (Donna Mills) is an evil schemer, so no one has been there to nurture Nina back to mental health or encourage her maturity. Nina has missed out on two decades of adulthood and, with that loss, comes the lack of emotional know-how to make good decisions.

The only family member Nina can rely on his half-brother Nathan West (Ryan Paevey) who does see to have her best interests at heart and he’s a good guy. Outside of the family, Nina’s only real ally is Franco (Roger Howarth). How scary is her life that a serial killer (albeit reformed) is the one watching out for her? 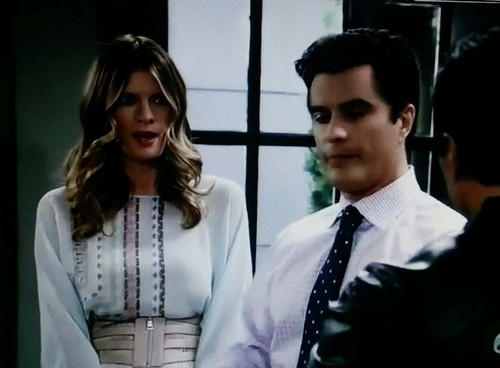 For all his faults, Franco seems to love Nina and he allows her to be herself without putting any pressure on her. And, Franco is willing to do the dirty work to keep her safe. But now, Nina is in the line of fire after marrying skeevy Ric. Their relationship seems to border on the perverted. Nina is pretty much like a teenager – she flits around, she’s naïve and doesn’t really have a clue of how to navigate the world.

Then there’s dirty to the bone, kidnapping, lying, disgusting Ric. The idea of him touching Nina has to distress Franco. Then recently, Nina was telling Franco all about the over-active sex life she shares with Ric. Franco was distressed and I was right there with him, but at least I knew that Nina was lying about “all the sex” (as Nina put it) that she and Ric have been having.

Of course, we know for now at least, Ric and Nina are not shagging, but it could happen at any time. Franco was taking it slowly with Nina – very age appropriate for her mental level – a few kisses here and there, but he wasn’t dragging her off to bed. Ric, however, may do just that. Ric and Madeline are after Nina’s money and revenge against those that did them wrong. And poor Nina will bear the brunt once this all comes out.

When I see Ric smiling and smarmy with Nina, it just makes my skin crawl. And knowing Ric, he won’t stop short of taking Nina to bed if he needs to in order to meet his goals. I’ve got fingers crossed that Ric still wants Elizabeth Webber (Rebecca Herbst) and is too wounded to jump into bed with new wife Nina. But with Ric, you just never know.

Of course I get that Nina is 40+, but she’s emotionally young. It would be like Ric taking advantage of a mentally challenged woman who operates at the level of a teenager. At least with Franco, she’s with someone who’s as much of a mental “troubled teen” as Nina is. They seem to operate on a lot the same level and with some innocence about life. But with Ric, it’s just disgusting.

So, what do you think GH fans? Is Ric carrying on with Nina totally perverse and disgusting or is it fair game? Share your thoughts then stay tuned for other “General Hospital” spoilers, gossips and plot theory on our favorite ABC soap!