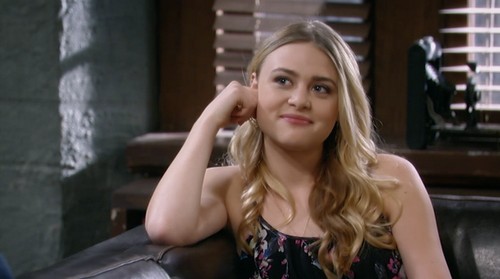 Check out these “General Hospital” spoilers for the Wednesday June 3 episode of our favorite ABC soap. We saw on Tuesday’s show that Silas Clay (Michael Easton) went to confront Denise DeMuccio (Maura West) and tell her that her scam won’t work on him and he knows she’s Ava. Silas wants Ava to get of town ASAP so his role in hiding her when she was a fugitive and kidnapping baby Avery won’t come to light. But we know that Ava is not one to go gentle into that good night and she’ll turn the tables on Silas. Silas has no real leverage over Ava since he is the one who kidnapped the involuntary marrow donor, baby Avery!

If Silas turns Ava in as a fugitive and explains to the police that her DNA was altered because of the bone marrow transplant, he’s cutting his own throat. Ava knows he took the bone marrow from her daughter Avery without permission. The kidnapping alone would have Silas in Pentonville for years to come then the unauthorized procedures on both Avery and Ava would mean his medical license would be revoked plus even more jail time. Silas is stuck, Ava knows it and she will blackmail Silas to keep his silence while she cavorts around Port Charles.

Rosalie Martinez (Linda Elena Tovar) is ready to carry out Nikolas Cassadine’s (Tyler Christopher) orders to bribe Nina Clay (Michelle Stafford) to get Franco (Roger Howarth) to turn over his shares of ELQ stock that he blackmailed out of Ned Ashton (Wally Kurth). Nina will be really tempted by that briefcase of cash since she has no money of her own and is now totally reliant on her shady new hubby Ric Lansing (Rick Hearst) for everything.

Nina will agree but will feel horrible about betraying Franco to meet her own selfish needs. Nina’s brother Nathan West (Ryan Paevey) and Franco are pushing Nina hard to get her marriage to Ric annulled. Nathan and Franco will make some threats but Nina will push back on them and they’ll have to admit defeat because neither has any real leverage to make Nina do anything. All they have is love for her, but Nina is hell bent to keep on the way she’s going.

Nikolas and Rosie are not only trying to take ELQ out from under Michael Quartermaine (Chad Duell), but Nik also has his sights on Michael’s shares. Looks like Nik wants 100% of the company and will stop at nothing. Meanwhile, Michael is working on his own strategy to recover the lost shares and will meet with Nikolas to ask if he has any shares that Michael can buy back. Nik will be surprised by this move. Is Michael playing right into Nik’s hands or is Michael savvier than Nik thinks he is?

Kiki Jerome (Hayley Erin) shows up at the gym to meet Morgan Corinthos (Bryan Craig) and is surprised to see the two brothers making up. Morgan will explain they have a tentative truce. But remember earlier when Morgan was working out and was thinking fondly about Ava? What’s the chance that he’ll also get the cougar hots for “twin sister” Denise who obviously has an eye for him? Ava may go for a second helping of sexy young man.

Plus, there’s still a chance that Morgan is Avery’s father, not Sonny. If that comes out, that may cause Morgan to rethink everything. He really did love Ava at one point and if he knows they had a child together, he may turn his back on Kiki. “General Hospital” rumors still point to more to come on baby Avery’s paternity and that’s the most likely scenario.

Meanwhile, Dillon Quartermaine (Robert Palmer Watkins) is back in Port Charles and does not want his mom Tracy Quartermaine (Jane Elliot) remarry Luke Spencer (Anthony Geary) who he will see – and not unjustly so – as a threat to Tracy’s safety and well-being. But it’s doubtful that Dillon will be able to drive a permanent wedge between those two. And how exciting will it be once Lulu Spencer (Emme Rylan) knows her former partner in crime (and the bedroom) is back in town?

Lots going on this week! Don’t miss a moment of GH then head back to CDL often for more “General Hospital” spoilers and gossip.