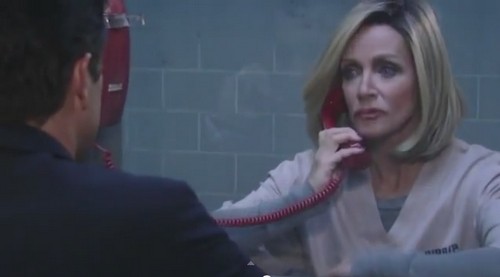 “General Hospital” spoilers tease that the week of June 1 – 5 will be an exciting one, and rumor has it GH fans will not want to miss a single episode. On May 29 the highly anticipated DNA test results came in, and Sonny Corinthos (Maurice Benard) learned that Denise was not Ava Jerome (Maura West), of course we all know otherwise. Spoilers indicate that during the week of June 1, Denise will get a fresh start – and Ava Jerome won’t have to worry about looking over her shoulder for the police or Sonny Corinthos. “General Hospital” spoilers tease this is what fans can expect to see during the week of June 1.

Monday June 1: “General Hospital” spoilers for June 1 tease that GH fans can expect to see Anna Devane (Finola Hughes) share a tender moment with Detective Sloane. Coming and going news confirm that Anthony Geary is back at the ABC soap after his brief time off, and spoilers indicate that on Monday Luke Spencer will reemerge in Port Charles. Watch out for Madeline and Ric – spoilers reveal that they are in cahoots to steal everything Nina owns, and then some!

Tuesday June 2: According to “General Hospital” spoilers for Tuesday June 2, Michael Corinthos (Chad Duell) and his brother Morgan (Bryan Craig) finally bury the hatchet and come to a mutual understanding. Meanwhile, Mayor Lomax offers Jordan a new job – and it is a tough opportunity to pass up. On Tuesday’s episode of GH fans can expect to see Tracy (Jane Elliot) and Luke (Anthony Geary) share a reunion.

Wednesday June 3: Wednesday’s episode of the ABC soap will find Nikolas Cassadine (Tyler Christopher) putting Rosalie to work and giving her a new mission to complete at ELQ. “General Hospital” spoilers also indicate that Nina (Michelle Stafford) feels guilty about a choice she made – and Silas (Michael Easton) might have to face the music.

Friday June 5: According to “General Hospital” spoilers, someone knows the truth about Silas’s role in Ava Jerome’s death/fake death – and the doctor finds himself on the receiving end of blackmail. Spoilers also tease that an unexpected guest makes an appearance at a Quartermaine party.

So GH fans, what do you think will come of “Denise” now that the DNA test results are in? Who is blackmailing Silas, obviously someone knows the truth about Ava and Denise? How do you think the residents of Port Charles will react to Luke Spencer’s return? Let us know what you think in the comments below and don’t forget to check CDL tomorrow for more “General Hospital” spoilers and news.