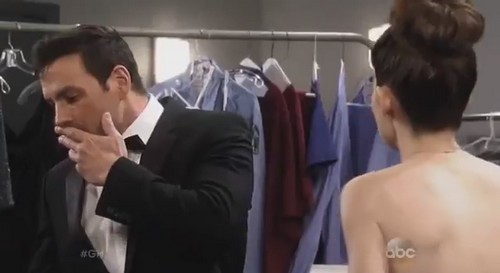 First, don’t count out Hayden Barnes (Rebecca Budig) just yet. “General Hospital” fans should know by now that a coma doesn’t mean squat. Look for the former fake wife of Jake Doe (Billy Miller) to wake from her Sleeping Beauty slumber just in time to wreak havoc on the machinations of Nikolas Cassadine (Tyler Christopher) and Liz Webber (Rebecca Herbst).

And Luke Spencer (Anthony Geary) will be back soon to sing his swan song and many other characters will return to see him off. Most importantly, Laura Spencer (Genie Francis) will return to say bon voyage to her soul mate but, interestingly, don’t look for Laura to leave Port Charles too soon. “General Hospital” spoilers indicate she’ll stick around for awhile (yippee!!).

Newcomer Valerie Spencer (Brytni Sarpi) will land a job at the PCPD thanks to Mayor Lomax’s encouragement and this puts her side by side with Dante Falconeri (Dominic Zamprogna) on a daily basis. This will drive Lulu Spencer (Emme Rylan) up a wall and her jealous antics and sniping will turn off Dante and amp up the tension in their marriage. About time Lulu and Dante got shook up!

And Silas Clay (Michael Easton) will be held accountable, in some way, for kidnapping baby Avery and using her – without anyone’s consent – to save Ava Jerome’s (Maura West) life. Ava herself will be angry that her baby was used. And Kiki Jerome (Hayley Erin) and Morgan Corinthos (Bryan Craig) still want answers about how their sister ended up in the apartment out of the blue.

Sonny Corinthos (Maurice Benard) will step back in and take over his mob biz in the wake of Duke Lavery’s (Ian Buchanan) death just as Julian Jerome (William deVry) is determined to step down. Sonny still wants someone to pay for Duke’s death, but will it be Jake or Julian? Or will Sonny be happy to take over all of the mob territory and let the grudge go?

Olivia Falconeri (Lisa LoCicero) can’t hide forever. But what can she do about that fakokta story she came up with about her baby with Julian dying? Will Olivia ask Dante to adopt the boy and pretend he and Lulu had been planning an adoption all along? That would be one way to keep her son close? Either way, the lie will fall apart and if Julian is truly out of the biz, he may make a bid for custody!

Nina Clay (Michelle Stafford) just said I do to Ric Lansing (Rick Hearst) but she has no idea she just hitched herself to someone even nuttier than Franco (Roger Howarth). The good news is, despite Nina brushing off Franco, he won’t give up on her and will set out to prove that Ric is up to no good and that he, instead, is worthy of her love. You’ve got to love Franco – a sweet and reformed serial killer…

“General Hospital” casting news indicates there will be some additions to the cast over the summer as well. A 50-something age male from an existing family will be back – some think it might be Dr Kevin Collins, formerly played by Jon Lindstrom. Other “General Hospital” rumors have kicked around that Ned Ashton (Wally Kurth) may be recast. Hopefully it will be Collins over Ashton…

There will also be a new youngish female re-introduced to Port Charles. There are a couple of options for this one as well. GH show runners could be brave and recast Robin Scorpio (Kimberly McCullough) but she’s such a fan fave, they likely won’t touch that one. Instead, it looks more like it could be Sarah Webber or Serena Baldwin. Either sounds fun.

Also, there’s a plane crash rumored to be coming this summer and “General Hospital” spoilers indicate it will be Ned and Olivia that are in a plane that goes down. Will Olivia’s baby be with them or will it be just the two of them on the plane? Will this poor child survive to enjoy the custody battle that’s sure to ensue once Julian knows his son is alive?

Luke will exit, rumored to be retiring for good. Ned is leaving because Kurth is headed over to Days to reprise his Kiriakis role. Shawn Butler (Sean Blakemore) is out for now in the wake of Jordan Ashford’s (Vinessa Antoine) revelation that he’s her baby daddy. Will he take son TJ and go?

Olivia is leaving because LoCicero is headed off for maternity leave and Anna will depart with Duke’s ashes because Finola Hughes is directing a movie this summer. By summer’s end, though, we’ll have both Olivia and Anna back!