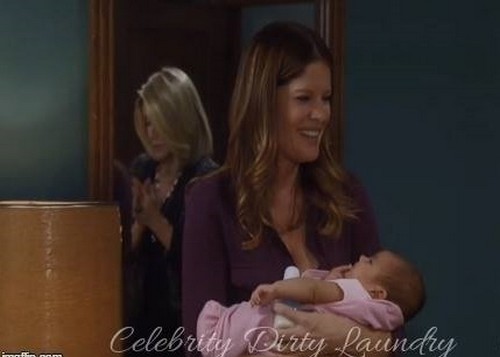 General Hospital spoilers tackle a topic that virtually got pushed under the rug or explained away in a GH fog of confusion – the fact that Kiki Jerome’s [Hayley Erin] bone marrow did not match her ‘mother’ Ava’s (Maura West)! We can say that not all bone marrow matches our parents’ BUT most likely it will. Baby Avery’s bone marrow matched Ava’s because we all know she gave birth to her – but we do not know that Ava gave birth to Kiki.

Ava was intertwined with Madeline Reeves’ (Donna Mills) life as they both had a common goal and that goal was to keep Nina and Silas apart. Madeline hired Ava to have an affair with him and while they were in a very compromising position Madeline had one of her cronies take pictures. Madeline then used the incriminating pics of Silas (Michael Easton) and his mistress to push her daughter Nina off the deep end and away from Silas. But it was not going to be that easy because Nina was pregnant with Dr. Clay’s baby and Nina loved him very much and she couldn’t wait to tell him.

Madeline’s number one goal from the time Nina slipped into the coma was to take over Nina’s HUGE inheritance that her father left her. Madeline lives and breathes money and there is nothing above that for her which is why she is very capable of taking her grandchild and giving it away. The only thing blood means to Madeline is another obstacle to her money!

Nina told Dr. Clay about the impending baby but her joy was short-lived, mommy dearest injected her with an overdose of anti depressants trying to kill the baby, but instead put her daughter into a coma. Nina stayed pregnant and gave birth to a normal birth to a baby girl (yes it is possible to give birth the normal way while in a coma, Google it). Madeline did not want an heir to Nina’s money so she took the baby and gave it to Sila’s mistress Ava. She told Ava that Nina had died and Ava knowing she could not be with Silas would take anything that linked her to him – and the baby was the next best thing.

We have established Madeline’s motive now let’s fast forward to 2014-15. Nina awakens from the coma finds out from her mother that her baby had died. But Nina has these strong maternal instincts linking her to other people’s babies… why is that? Because she is a mother herself but does not know it! Very logical that Kiki would be her daughter – she hated the kid from the beginning and that always makes for a great relationship in the GH soap world.

Silas’s DNA was tested against Kiki’s so we know he is her father BUT we don’t know if Ava is her biological mother and it is highly doubtful. The odds that Nina is Kiki’s mother are are very high and it would make for a great storyline considering they put Nina into early menopause and she will not be able to have a child again. To find out Nina is a mother after all that she has been through would be a GREAT revelation and to top it off the man she adored for so long is the father. Nina may come back down to earth for this kind of reality.

The other part of the story that would lay nicely in place is the fact that Franco and Kiki get along so well. Nina may have married Ric Lansing (Rick Hearst) in a typically delusional state but her heart is still with Franco.

Kiki’s world will be turned upside down when this shocking maternity switch becomes known. Kiki will lose the only mother she knew (even though Ava is supposedly dead right now) and she will lose her blood relationship to baby sister Avery. Perhaps even worse, Kiki will be linked to crazy Nina who she cannot stand! The most ironic play of events in this whole twisted drama is when Nina took a pregnant Ava hostage then shot her up with muscle relaxants, Ava was terrified probably for the first time in her rotten life. Nina was going to take Ava’s baby and make it hers – the crazy twist to that is that is exactly what Ava did to Nina 20 years earlier but does not know it yet.

During these exhausting dramatic scenes we then insert Madeline Reeves and find out that Madeline and Ava know each other. No love lost there that’s for sure BUT still, nevertheless interesting that these 3 women are now brought together 20 years later. Madeline and Ava both have lots to lose if the truth comes out that Kiki is not Ava’s but Nina’s daughter. But for Nina it’s a win-win. Keep reading CDL General Hospital spoilers and watch all of the GH drama unfold!