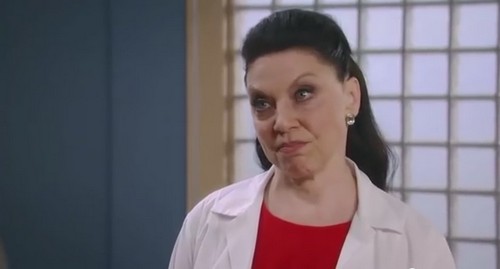 Check out these “General Hospital” spoilers for the Tuesday, May 26 episode. In honor of the Memorial Day holiday on Monday, ABC will re-air the April 1 GH 52nd Anniversary show. Then we pick up with fresh material on Tuesday and it’s back to the juicy storylines!

As you saw Friday, Ava Jerome (Maura West) is finally back! She’s alive, well and in a bad disguise. Everyone but Silas Clay (Michael Easton) will be shocked to see her back. Ava will be happy to see her brother Julian Jerome (William deVry) yet sad to hear about the “death” of his newborn son. Ava will also be angry at Silas for taking stem cells from baby Avery to save her, but she’ll get over it.

The big question is, will Ava have a bombshell to drop? She’s not happy that Michael Quartermaine (Chad Duell) has custody of her daughter – but does she have some information to change this situation? “General Hospital” rumors have been swirling for awhile that Sonny Corinthos (Maurice Benard) is NOT the father of Avery and that it may be Morgan Corinthos (Bryan Craig) instead. Wouldn’t that be fun? And it would throw a wrench into Morgan’s rebooted relationship with Kiki Jerome (Hayley Erin).

Also, Carly Corinthos (Laura Wright) will tell Jake Doe (Billy Miller) that Sonny still wants someone to pay for Duke Lavery’s (Ian Buchanan) death. Sonny is still gunning for Jake and will not want to deviate – that’s one stubborn mobster. Will Carly side with Jake even if it drives Sonny out of her life (and bed)? Sonny will head over to see his brother Ric Lansing (Rick Hearst) about Shawn Butler’s (Sean Blakemore) fate, he will be stunned to find Nina Clay (Michelle Stafford) there with Ric and even more shocked to hear they tied the knot.

Sonny wonders why they got hitched – and all of us have to wonder too. Did Nina wed Ric on a whim just to hack off Franco (Roger Howarth)? Or was it to try and get her money back that’s frozen? Either way, we can bet that Nina does not know the extent of Ric’s plans for her. That guy is just no good. Thing is, Shawn may not even need a lawyer if he takes Jordan Ashford (Vinessa Antoine) up on her offer. Remember, Jordan shocked Shawn when she told him he’s really TJ Ashford’s (Tequan Richmond) daddy.

And, we also know that Sean Blakemore has already filmed his final scenes and is leaving the show. So the question is, which of the two avenues will he take for his exit. Will Shawn rat out Sonny and then go into Witness Protection, perhaps with TJ in tow? Or will Shawn turn down the deal and head out to Pentonville? Or, worse yet, will Sonny take him out to prevent him from talking? Likely not the latter – Option A or B is more likely based on “General Hospital” rumors on the web.

Scotty Baldwin (Kin Shriner) caved and let Jordan talk him into offering Shawn a deal and will gleefully tell Commish Sloane (Grayson McCouch) that he’s close to taking down the Corinthos crime family. Sloane has been so focused on the Jeromes, he’s overlooked them.

And in other mob news, Jake went looking for Liz Webber (Rebecca Herbst) after he told Sloane he was done with the CI gig no matter what. At her house, Jake notices a pic of Liz and Jason. Will this nudge him toward unlocking some memories of his past life with Liz? Also, Sloane will have some news for Jake – he may offer Jake a new gig? The question is, is it another CI deal or a trip to Pentonville?

Meanwhile, heartbroken Franco will go see council from Liesl Obrecht (Kathleen Gati) on why Ric would wed Nina (and vice versa). Franco will also blab to Nina’s half-brother Nathan West (Ryan Paevey) that his sister went and did yet another crazy thing and married the off-the-rails attorney. Nathan will not take this well. No surprise there.

Also in coming days, look for Valerie Spencer (Brytni Sarpi) to go job hunting. She’s not happy to live on Spoon Island at Chez Cassadine and mooch off Nikolas Cassadine (Tyler Christopher). Valeria will apply for a job at the PCPD. This will annoy cousin Lulu Spencer (Emme Rylan) who sent Valerie to Wyndemere to get her away from Dante Falconeri (Dominic Zamprogna) and now they’ll be cozy at work. Look for a rocky time ahead for Lulu and Dante!

Head back to CDL for more “General Hospital” spoilers and gossip after you watch Tuesday’s all-new episode.

The General Hospital video preview for May 26, 2015 featuring Franco and Dr. O!