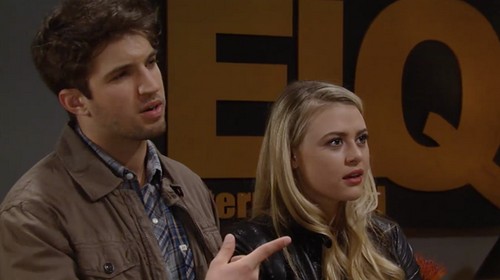 Check out these “General Hospital” spoilers for the Friday April 24 episode. The mob war is heating up, Ric’s plan is falling apart and baby Avery will turn up soon! Here’s what to expect. Hayden Barnes (Rebecca Budig) finds Carlos Rivera (Jeffrey Vincent Parise) in her hotel room and is terrified. He won’t get to take a shot at Duke Lavery (Ian Buchanan) because of this second interruption. Hayden will cry to Jake Barnes (Billy Miller) that she was terrified by an armed man in their room. Will this get her some sympathy cuddles from her faux hubby?

Carly Corinthos (Laura Wright) tries to tell Jake the truth about Hayden and Pete Ross, but Jake is getting annoyed that Carly keeps after this like a rabid dog with a bone. Jake will not want to hear the truth that Carly is offering and this will allow Hayden to keep her scam going for at least a few more days. But Nikolas Cassadine (Tyler Christopher) soon figures out that Ric Lansing (Rick Hearst) is the mastermind behind her scam.

On Thursday’s show, looks like Bruce (Patrick Robert Smith) or Carlos took a shot in the dual mob hits that were taking place. Likely it was Bruce that was the one who fired and nearly shot Anna Devane (Finola Hughes). Anna will confront Duke about the botched hit and will demand to know who the shooter was. Meanwhile, Duke finds out there’s a hit out on him and will be on high alert.

Unfortunately, Duke will be shot during the Nurses Ball massacre and based on “General Hospital” spoilers, will kick the bucket on May 8. That doesn’t give Anna a lot of time to figure out her feelings. You have to wonder if she’ll turn to sexy Commish Sloane (Grayson McCouch) for comfort after she loses the love of her life. You’ve got to admit Sloane looks good wet from the shower in a towel…

Just as Sabrina Santiago (Teresa Castillo) revealed to Sonny Corinthos (Maurice Benard) and Michael Quartermaine (Chad Duell) that he’d been drugged, Kiki Jerome (Hayley Erin) and Morgan Corinthos (Bryan Craig) show up and Sonny demands to know what they’ve been up to. Sonny will be absolutely furious that Morgan drugged his brother Michael and, once again, Morgan will be upset that he’s being called out when he was trying to prove himself to dad Sonny and Michael gets all the positive attention.

Silas Clay (Michael Easton) wants to know why Nathan West (Ryan Paevey) is still bugging him and will ask if he’s still a suspect in Avery’s kidnapping. Nathan will be very interested in why Silas is spending so much time in NYC. Nathan had good cop instincts to be honing in on Silas because he has been up to all kinds of shenanigans aside from harboring thought-to-be-dead fugitive Ava Jerome (Maura West).

Looks like we’ll find out soon that the blood work that Silas took from Avery when he examined her wasn’t for Child Services but to find out if Avery is a donor match for her mom Ava. When Silas got back good results, he snatched the baby and harvested her bone marrow. Then, unbeknownst to Ava, who thought she was getting life-ending drugs, Silas administered a stem cell treatment from Avery’s bone marrow to save Ava’s life.

When Kiki and Morgan stop by Silas’ place for her to chat up her dad, they’ll find baby Avery. She looks happy and healthy except for a bruise and a band aid from where he took the bone marrow. Will they turn Silas in? Considering all the illegal activities Kiki and Morgan have been up to themselves, it’s likely they’ll cover for Silas and just be happy to have their sister back and know she was safe. Perhaps Silas will convince them not to blab by telling them Ava is alive and that’s why he had to take Avery.

Friday’s episode of General Hospital should be good, but look for more knuckle-biting cliffhangers. Come back to CDL every day for more “General Hospital” spoilers and gossip.